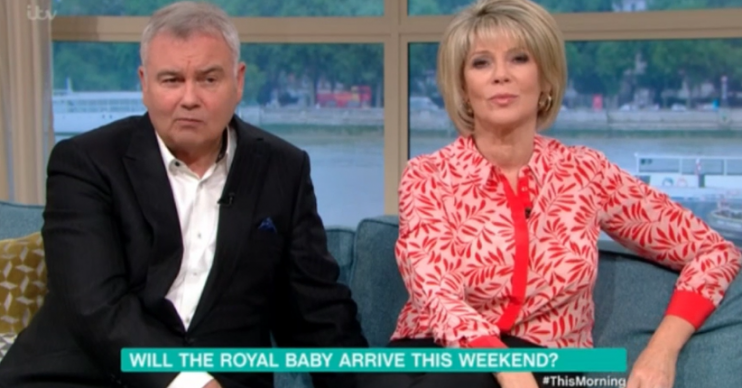 He was discussing when the royal baby will arrive

This Morning viewers were amused when Eamonn Holmes referred to the royal baby as a “sprog”.

The world is eagerly awaiting news of when the Duke and Duchess of Sussex’s first child will arrive.

During today’s edition of the daytime show, Eamonn and wife Ruth Langsford were joined by royal editor Camilla Tominey, Rupert Adams from bookmakers William Hill and Marie Louise – who is known as “the modern midwife” – to discuss Baby Sussex’s impending arrival.

Opening the segment, Eamonn said: “Baby Sussex, who is Meghan and Harry’s little sprog that we’re waiting for.”

Ruth quipped: “Don’t think they call it that in royal circles,” to which Eamonn added: “No they probably don’t but anyway, will it make its way into the world this weekend?”

Another wrote: “Oh my god Eamonn just called baby Sussex a sprog 🙈 I go mental when my mother-in-law calls my kids sprogs. @thismorning.”

Oh my god Eamonn just called baby Sussex a sprog 🙈 I go mental when my mother in law calls my kids sprogs. @thismorning

Meanwhile, bookies William Hill has predicted that Baby Sussex will arrive on bank holiday Monday and it will be a little girl.

Buckingham Palace recently said that Harry will launch the one year countdown to the Invictus Games 2020 on an overseas trip next Wednesday, May 8, and Thursday, May 9.

The trip has left fans wondering if his wife Meghan has already given birth or whether she will give birth before Harry goes, meaning it could happen in the next few days.