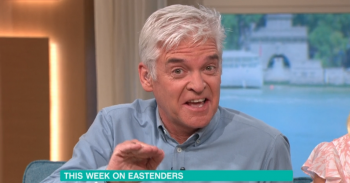 What do you make to presenter’s mimicry of EastEnders hard man?

Phillip Schofield tickled This Morning viewers earlier today when he demonstrated his talent for a soap impression.

The presenter, 57, put on a gravelly cockney accent to sound like Phil Mitchell during a preview of tonight’s episode of EastEnders.

The Albert Square veteran believes she has been locked inside a shipping container – and a short clip showed the hard man very briefly break into a canter as he panicked over Louise’s whereabouts.

Sharon joked: “Now Phil’s there running around. Well, a little bit of running… Not too much because it’s Phil!”

Host Phillip agreed, pointing out how his near-namesake only managed to stretch his legs to the tune of a mere couple of paces during his dashing about.

“I’m not running any further than that,” Phillip said in a husky voice, taking off the notorious Mitchell brother.

He continued: “I’m gonna give you two steps and that’s it. That’s the run, alright? Leave it.”

Fans were most amused – with several indicating they enjoyed Phillip’s impression when a clip of it was posted on Twitter by the This Morning social media team.

Others evidenced their approval with emojis and gifs.

What do you make to it?

Is it Phil Schofield or Phil Mitchell? 😂 #EastEnders @Schofe pic.twitter.com/yocp3WWZHk