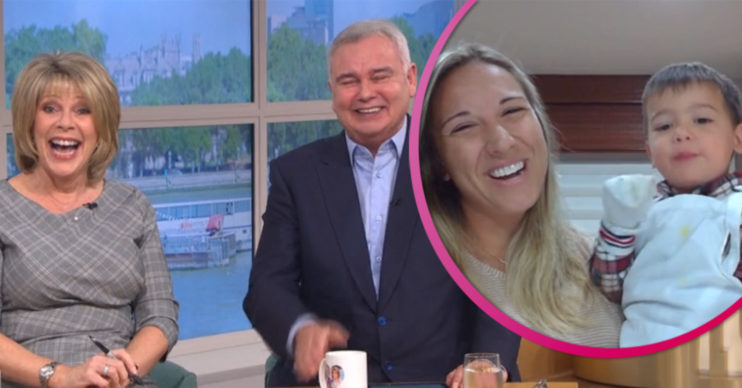 This Morning: Viewers in hysterics as toddler shouts ‘mummy’s boobs’ live on air

Wasn't what anyone was expecting

This Morning viewers were in hysterics today (Friday October 2) when a discussion about a viral video took an unexpected turn.

Hosts Ruth Langsford and Eamonn Holmes burst out laughing when a toddler shouted “mummy’s boobs” during a live interview.

Ruth and Eamonn were chatting to mum Christy and two-year-old son Cade live in America on today’s show.

The toddler had starred in a video with his grandma about baking, which showed him impatiently trying to eat the mixture before it was ready.

During the interview, Cade suddenly began pawing at his mum’s chest.

But they couldn’t quite believe what he was going to do next.

What happened on during the This Morning interview?

To the astonishment of everyone, Cade blurted out “mummy’s boobs!”

Ruth and Eamonn cracked up with laughter, as did TV chef Phil Vickery.

Cade is giving me life on #ThisMorning 🤣 this kid is soo funny! @thismorning

It wasn’t long before viewers joined in the merriment.

“Mummy’s boobs… He’s about to have another video go viral,” one said, followed by a cry-laugh emoji.

Another wrote: “Haha that kid is brilliant! ‘Mommy’s boobs’.”

Haha that kid is brilliant!

Meanwhile, during the chat, Christy explained how her little boy went viral.

She said: “He definitely enjoys being in the kitchen. We’ve continued doing some videos, so he really likes that but he has no clue.

“We were shocked when the video went viral. We weren’t really prepared.”

Concluding the interview, Eamonn said: “Well he’s famous worldwide and we appreciate you getting up.

“Thank you very much indeed. Cade, we’ll leave you with Mummy’s boobies!”