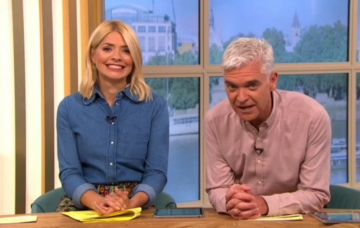 This Morning suffered a technical gaffe during Thursday’s show after the fake window view stopped working and turned black.

But despite being in a new studio in West London, This Morning brought its old view of the River Thames with it thanks to the magic of television and editing.

But on Thursday, it decided to stop working.

As hosts Holly Willoughby and Phillip Schofield enjoyed a phone chat with Miriam Margolyes about her upcoming stint in the Call The Midwife Christmas special, the background screen went black.

The crew members behind the camera quickly changed the angle so the screen wasn’t in shot, as Phil and Holly continued presenting.

A photo of Miriam then popped up on screen giving producers some time to sort out the blunder.

Holly and Phil were then shown back in front of the window view like nothing ever happened.

But the technical blunder definitely didn’t go unnoticed by viewers, who shared their amusement on Twitter.

One person said: “I can’t stop laughing at Phil and Holly’s faces when the fake river backdrop screens turned to black during the show.”

Another viewer accused the show of “conning” them. 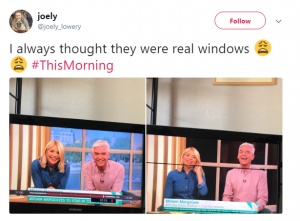 And the gaffe was also noticed by Keith Lemon.

Keith and Paddy McGuinness appeared on the show to discuss the new series of their show, The Keith & Paddy Picture Show.

During their interview, Holly jokingly accused Keith of “pulling the plug” to cause the error.

“This is my first time in the new studios and they’re alright…but it’s that for me,” Paddy said, pointing to the fake view.

“Oh! It went off,” Keith cut in. “They had to go right close into you. Someone must have pulled the plug and it all went black,” as he burst into laughter.

Holly replied: “Shhh,” as Keith quipped: “I love that stuff though!”

“I bet it was you!” Holly exclaimed.

Did you notice the blunder? Let us know by leaving us a comment on our Facebook page @EntertainmentDailyFix!