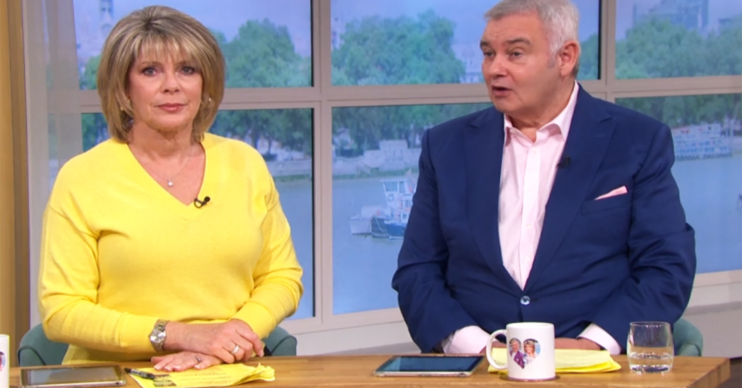 The pair were just discussing posture!

On Tuesday’s show (August 25), the husband and wife duo had fans in stitches with their banter.

But Eamonn made his cheeky quip as he and Ruth discussed posture.

Ruth insisted Eamonn was slumped in his chair but he said he was sat upright.

Ruth told him: “Sit up straight.”

However, Eamonn replied: “I’m fully erect, what are you talking about?”

One person said: “That fully erect comment is just…”

I’m fully erect, what are you talking about?

One tweeted: “Just scrolling through Twitter listening to #ThisMorning and hear @EamonnHolmes say I’m fully erect! That got my attention.”

Just scrolling through Twitter listening to #ThisMorning and hear @EamonnHolmes say I’m fully erect! That got my attention 😂

Eamonn and Ruth have been filling in for Phillip Schofield and Holly Willoughby over the summer.

However, next week, Holly and Phil are returning for a brand new year of the daytime show.

Holly and Phil return to This Morning next week

The pair will be joined by a string of guests including actor Nigel Havers, who will present a four-part ‘Best of British’ segment.

He said: “It’s a genuine pleasure to be able to take the time out to tour Britain for This Morning viewers this September.

“I’ve packed some hand sanitiser, a picnic blanket and an umbrella just in case.”

In the segment, he will travel by air, sea and land from Dorset along the great Jurassic Coast.

He said: “Dorset is one of my favourite parts of the country and I feel very lucky to have been able to get out and explore the mighty Jurassic Coast during this time.

“I cannot wait to share some gorgeous recipes from the area.

“Not to mention that viewers will get the chance to judge my kayaking skills … so watch Torode back out on the road.”

Ruth and Eamonn will continue to host the show on Fridays when Holly and Phil return.