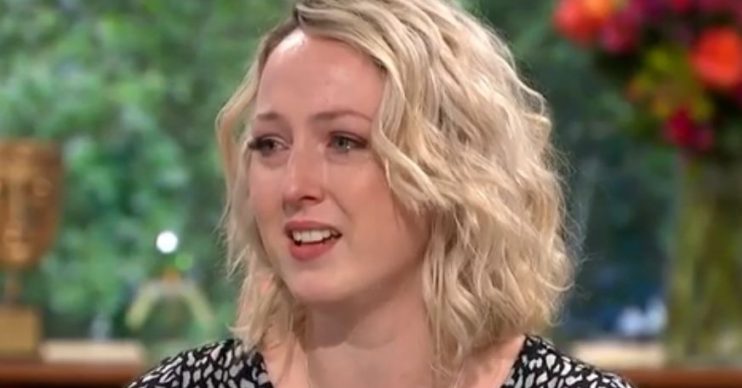 A young mum had This Morning viewers in tears with her story of being misdiagnosed with an aggressive form of cancer and unnecessarily having a double mastectomy.

She had surgery and underwent chemotherapy before anyone realised her diagnosis was a mistake, leaving her traumatised.

Sarah appeared on today’s (July 22) This Morning and presenter Eamonn Holmes said to her: “You, in a way, you’re suffering for someone else’s mistake. But you’re telling me you feel partly to blame for all this. Why?”

She replied: “Because I didn’t feel poorly. I’m very much feeling guilty that I should have known.”

Eamonn told viewers that Sarah kept her misdiagnosis from her family and friends, and she explained: “How can I possibly… feel sorry for myself, when I don’t have cancer?”

Host Ruth Langsford said: “It’s mind blowing, to get that news. Everything you’ve gone through.”

Sarah explained that she had a lump in her breast for years but was always assured it was benign and “nothing to worry about”. She sought medical advice when her newborn wouldn’t breastfeed on the side with the lump and, after more scans and a biopsy, Sarah was told she had cancer and was fast-tracked for treatment.

Speaking about the moment she got the news that it was all a mistake, she explained: “I got a phone call about a week after my mastectomy. Any lady or man going through treatment will understand what I’m about to say. If you get a phone call early, you instantly… you’re scared.

“A secretary phoned and said, ‘Can you come in on the seventh of June?’ which was a whole week and a half earlier than our appointment.

“When we arrived at the hospital that morning, I took her hands, I said, ‘Am I dying? Am I dying? Just tell me now before we go in, am I dying? Is it terminal?’ And she said,’No, quite the opposite’.”

Asked how she felt when she was told, Sarah broke down in tears as she described initially thinking the doctors meant she had beaten her cancer.

She said: “I thought, I’ve done it. All that suffering, all that pain, and struggling to look after my little boy, was for something because now I can be his mum.”

On Twitter, viewers were in tears as they heard Sarah’s heartbreaking story.

One said: “This story has got me. What a brave woman to go through that, yet still be kind and forgiving #thismorning.”

Another tweeted, alongside a string of crying emojis: “#ThisMorning This poor woman OMG.”

A third wrote: “Even I’m welling up. What a bloody shame for this woman. I actually have no words! I can’t imagine, what a lovely young woman.”

Even I’m welling up, What a bloody shame for this woman 😢 I actually have No words! I can’t imagine, What a lovely young woman 💖 #thismorning

Someone else commented: “Absolutely shocking story on #thismorning, what a traumatic time this poor woman and her family have been through.”

“This is really heartbreaking. Poor woman,” said a fifth, adding with a sad-face emoji: “Sorry to hear this, Sarah.”

Absolutely shocking story on #thismorning, what a traumatic time this poor woman and her family have been through.

This is really heartbreaking. Poor woman. Sorry to hear this Sarah ☹️ #thismorning