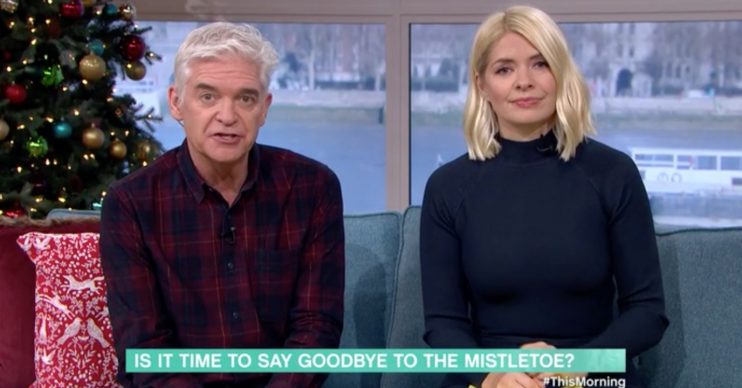 This Morning viewers fuming after guest wants mistletoe to be banned

She says that not all traditions are good

With Christmas looming large on the horizon, many people are thinking about dusting down their favourite festive traditions.

But viewers of This Morning were left up in arms after a guest said that she’d ban kissing under the mistletoe at office parties in the wake of the #MeToo movement, saying that “not all traditions are good”.

Read more: This Morning’s Christmas decorations get a mixed response from viewers

Hosts Phillip Schofield and Holly Willoughby explained that in a recent survey, more than three quarters of office staff said a cheeky Christmas kiss no longer feels ‘appropriate’ in light of the #MeToo movement.

Etiquette expert Liz Brewer and journalist Rebecca Reid were brought in to discuss the topic.

Rebecca, who wants to ban kissing under the mistletoe at parties, said: “Lots of things like fox hunting and corporal punishment in schools and we decided to give them the heave-ho. Not all traditions are good.

“The behaviour I object to is when people feel objectified or harassed just because it’s Christmas,” she continued.

“You don’t have to give a full-blown kiss – no tongues allowed – but what you are showing is the love of Christmas,” she continued.

This tradition’s been with us a very long time. You just don’t want to make anyone feel uncomfortable.

“This tradition’s been with us for a very long time. You just don’t want to make anyone feel uncomfortable.”

Phil went on to defend mistletoe traditional calling it a “frivolous tool for a bit flirting”.

And it wasn’t long before a chorus of outraged viewers took to social media to voice their anger at the suggestion that the tradition should be stopped.

A girl booting off saying mistletoe should be banned on this morning. Get a life hunny. It’s a tradition, you can say no! Pathetic. Sat there like everyone wants to get off with her!!

Did this woman on this morning really just compare mistletoe to corporal punishment and fox hunting? #ThisMorning

This morning is really bizzare. Feel free to kiss me under the mistletoe I won't sue xxxxxx

why's someone on this morning getting offended by mistletoe 😭😭😭

What is with this stupid girl on this morning?! If you don’t want to kiss someone under mistletoe just say no! Why do we need to ban it?

One angry viewer said: “What is it with this stupid girl on This Morning?!

“If you don’t want to kiss someone under the mistletoe just say no!