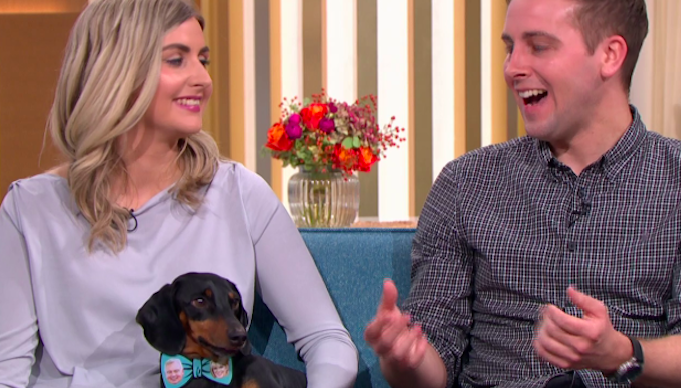 We heart Harlso the Dachshund

Viewers of This Morning all fell a little bit in love today, when one of their guests was able to demonstrate a very unique skill.

We’ve all heard of Lassie the Wonder Dog, who selflessly put herself in dangerous situations to save her human friends.

On Friday’s This Morning (October 11), married hosts Eamonn Holmes and Ruth Langsford were lucky enough to meet a sausage dog with a very useful talent.

The Dachshund – who has become an internet celebrity – appeared on the show to showcase his ability to balance household items on his cute head!

And those watching from home found the mutt perfectly adorable as he perched anything from a bar of Toblerone to a stack of doughnuts on his crown.

Read more: This Morning’s Dr Chris opens up about his battle with depression

Dressed for the occasion in a This Morning-themed bow tie, Harlso joined his owners Paul and Jennifer from Belfast in the studio.

Eamonn and Ruth challenged the black and brown pooch to balance a series of food items on his head, starting off with a small pumpkin.

He then moved on to doughnuts and a large bar of Toblerone chocolate.

In answer to any viewers who might suggest the stunts were cruel, Ruth insisted: “We asked our vet because we thought people might say it was cruel.

“He said there’s nothing wrong with this. In fact, it could be seen as good behaviour training.”

Harlso, who has a staggering 98,100 Instagram followers, also played a big part in his owners getting engaged as he balanced the engagement ring on his head!

How could she say no to those puppy dog eyes?

This Morning viewers melted at the sight of the Dachshund, with one tweeting: “I love him!”

Another said: “Awww so cute.”

A third typed: “The sweetest thing I’ve seen for ages.”

Many other This Morning fans shared photos of their cute pets, although none were able to balance items quite as expertly as Harlso.

Do you enjoy seeing cute animals on TV? Leave us a comment on our Facebook page @EntertainmentDailyFix and let us know what you think!