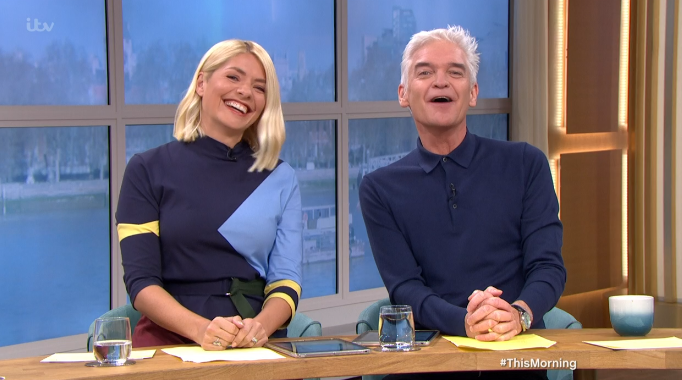 Holly and Phil returned after their Christmas break

Viewers of This Morning were thrilled as Holly Willoughby and Phillip Schofield returned following their Christmas break.

And some were even more delighted when realising the show started an extra 30 minutes early – part of ITV’s new daytime schedule.

The show aired at 10am instead of its usual 10:30am slot and the new format was welcomed by many fans.

Holly said: “This feels really weird. It’s only 30 minutes earlier and we’ve never done this before.”

Phil added: “It’s the first time the show has been on air at 10am and we’re going to mark this historic day and who better to help us than Alison Hammond.”

Alison Hammond was live from a cathedral in Liverpool to ring the bells to celebrate the 10am start.

Many viewers loved having the duo on their screens half-and-hour earlier.

One person said on Twitter: “To my surprise #ThisMorning now starts at 10am, I thought maybe my clocks were behind.”

Another wrote: “I’m so pleased that we get to enjoy an extra 30 minutes of Phil and Holly having a giggle moment potentially.”

A third tweeted: “Could I be any happier that my first proper day of maternity leave and @thismorning is starting at 10am?! The next 9 months are going to be great!”

To my surprise #ThisMorning now starts at 10am, I thought maybe my clocks were behind 😂😅

I’m so pleased that we get to enjoy an extra 30 minutes of Phil and Holly having a giggle moment potentially – ye hee and Happy New Year, This Morning and ITV 🙂 👍!

Could I be any happier that my first proper day of maternity leave and @thismorning is starting at 10am?! The next 9 months are going to be great! 😂

However, some weren’t keen on the new format and shared their thoughts.

One wrote: “3 minutes in, and I’ve already decided I can’t stand to watch Phillip for an extra half hour in the morning. Need to try another channel for something different.”

Another added: “Well this well worth the extra half hour isn’t it,” seemingly referring to the first two topics – a woman who gave birth in her car on New Year’s Eve and an interview with Michael Barrymore.

3 minutes in, and I’ve already decided I can’t stand to watch Phillip Smugfield for an extra half hour in the morning. Need to try another channel for something different…#ThisMorning

not another bloody half an hour of #thismorning

It comes after ITV announced in November last year that the schedule was having a shake-up following the axe of The Jeremy Kyle Show earlier that year.

From today (January 6), Good Morning Britain will be extended by half an hour to run from 6am until 9am, Lorraine will move to 9am, followed at 10am by This Morning, also extended by 30 minutes, before Loose Women at 12.30pm, ending at 1.30pm.

I’m so pleased that we get to enjoy an extra 30 minutes of Phil and Holly.

“We can’t wait to bring our audiences an even greater abundance of personalities, surprises, warmth and humour and a bigger and better schedule for 2020.”

For the next 30 minutes, @CharlotteHawkns is going to bring you the top stories you’re waking up to.

Then at 6.30am, Charlotte will be joined by @piersmorgan and @susannareid100 until 9am. pic.twitter.com/b9A4qPo0Nb

On Monday morning, GMB hosts Piers Morgan and Susanna Reid returned from their festive break and started the show at 6:30am.

Their co-star Charlotte Hawkins presented the top stories in Britain this morning for 30 minutes from 6am.