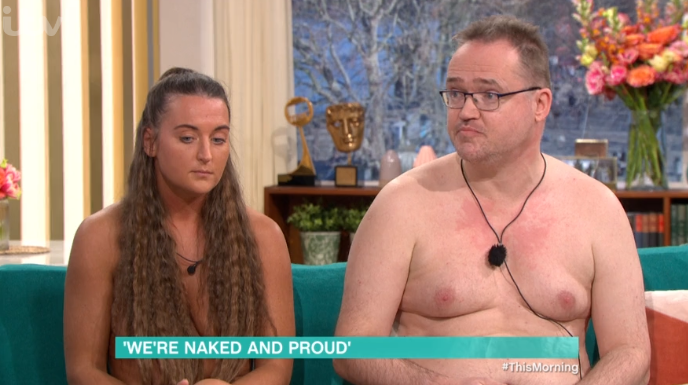 They want to stop the hate against them

Viewers of This Morning were left shocked today (March 13) when two guests appeared on the show naked.

Hosts Eamonn Holmes and Rochelle Humes interviewed President of British Naturism Mark Bass and Pam Fraser about why they decide to go naked on a daily basis.

Speaking about why he chooses to go naked, Mark explained: “It’s about seeking that acceptance and your point about body shape is really important because we’ve got a lot of people that are feeling intimidated by society because of how they look.

“If you got to a naturist event you’ll encounter people that might be wearing a colostomy bag, or have got major surgical scars or have had mastectomies.

It stems from a good place and to have a belief that I feel so strongly about negative comments.

“And these are areas of society where we kind of marginalise people because they don’t match a perfect body type, and so actually just being accepted for who you are becomes really important.”

Pam added: “It stems from a good place and to have a belief that I feel so strongly about negative comments.

“I think it’s important you’re happy in your own skin.”

We're not sure @RochelleHumes has quite got the hang of how to react to naturists… 🙊 #ThisMorning pic.twitter.com/2ZbYZnSTKI

Rochelle, who was standing in for Ruth Langsford after she called in sick, admitted she was struggling with where to look.

She said: “Instantly, I did that today. I looked perhaps in the direction I shouldn’t.

“They’re laughing in my ear now. It’s the unknown to me. I’m not used to seeing someone walk into the studio naked.

Viewers watching were left divided over Mark and Pam’s appearance on the show with some concerned about the sofa.

One person wrote on Twitter: “I hope they’re sitting on a towel. Who’d want to sit on that sofa after their naked bits have been on it?”

Another said: “If those naked people have to sit to talk to Eamonn and Rochelle, #ThisMorning better put plastic sheets or at least a tarpaulin on that sofa.”

A third tweeted: “I wonder if these two are sat on a bit of plastic or if they’re sat with their naked bums on the bare sofa.”

#Thismorning I wonder if these two are sat on a bit of plastic or if they're sat with their naked bums on the bare sofa pic.twitter.com/LTyTbfw1UV

Eamonn cleared things up on the show and told fans that the sofa was in good hands.

He said: “A lot of you have been in touch about the cleanliness of our sofa. Cloths were used. No couch was harmed!”