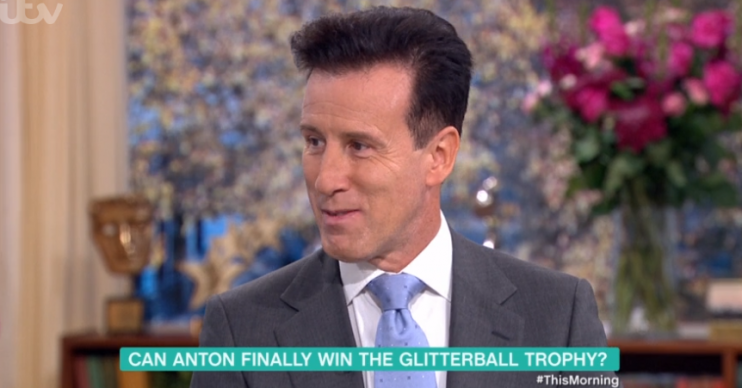 He appeared to have a new 'do

The dancer appeared on Thursday’s show and it seems he’s dyed his hair a lot darker.

As he spoke to hosts Holly Willoughby and Phillip Schofield, viewers flooded Twitter with comments about his makeover.

One person said: “Has Anton dyed his hair??? Looks like a lego helmet! I’m 28 and almost a silver fox.”

Has Anton dyed his hair??? Looks like a lego helmet! I’m 28 and almost a silver fox 👍🏻👍🏻👍🏻 #ThisMorning pic.twitter.com/lKdMnAQY30

A fourth added: “If you are going to dye your hair, Anton, at least get a professional to do it #ThisMorning or natural.”

If you are going to dye your hair, Anton, at least get a professional to do it #ThisMorning or natural.

#ThisMorning Anton having his hair done this morning. pic.twitter.com/kAk4QizuTu

During his appearance, Anton revealed his Strictly partner Emma Barton’s hectic schedule has made training for the show “challenging”.

He said: “She’s doing incredibly well. She is constantly working on EastEnders.

“She’s doing two massive jobs. Emma was filming Monday and Tuesday so we only got into the studio.

If you are going to dye your hair, Anton, at least get a professional to do it.

“I’m going to see her this afternoon and we’ll work until late. She hasn’t had a lot of time but she’s such a pro.”

Anton, 53, has never won the Glitterball trophy and has been previously partnered with the likes of Ann Widdecombe and Nancy Dell’Ollio in the past and said he is thrilled with his latest partner.

He added: “It’s a different story for me. I can put away the humorous side and do something else which is lovely for me as a choreographer.”

The pair will dance the Paso Doble to Nothing Breaks Like A Heart by Mark Ronson and Miley Cyrus.