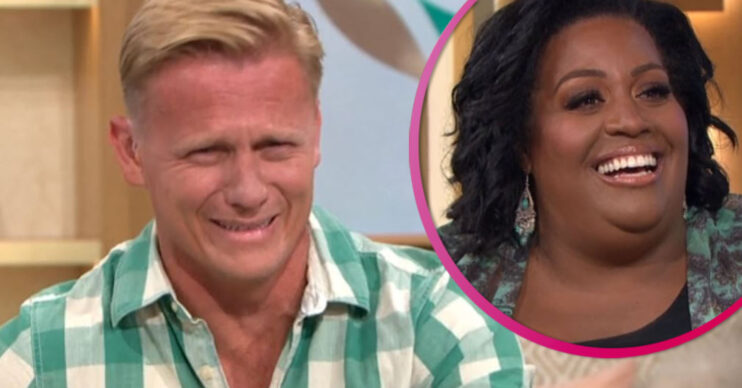 Dr Scott struggled to compose himself

Dr Scott appeared on Friday’s show to advise viewers on their pet problems.

Viewer Debby rang in about her hamster, who has been chewing all around her cage.

Before Debby had began talking about her hamster, Dr Scott, Alison Hammond and Rochelle Humes caught the giggles.

Debby explained: “She is chewing all around her cage, constantly all night.

Debby continued: “She chews right up where her water bottle is and she’s scratching everywhere as well.”

Alison said: “Okay Dr Scott, I know you’re maybe finding this a little bit hilarious but can you help this hamster.”

At this point, Dr Scott was starting to lose it as he said: “I’m so sorry, I really like hamsters but sorry, sorry, very unprofessional of me.”

Alison said: “Come on doc, pull yourself together!”

Dr Scott continued: “I would say it’s early days with your hamster and give it lots of attention and lots of things to do…” as he began laughing again.

He added: “If it’s having a boring time in his environment, it might chew the bars but it’s early days. It’s only two weeks in.

“So I would say try and play with your hamster, give them lots of things to play with…” as he burst into giggles.

Alison asked: “What’s he laughing at? I don’t know what he’s laughing at all. Listen, I’ll go onto our next one. I hope that’s helped Debby, I really do.”

Dr Scott added: “I love you and your hamster, I promise!”

Rochelle said: “I’m not sure what’s just happened. I’ve never seen you lose it like that Scott.”

Viewers were divided over the segment, with many criticising Scott and Alison for laughing.

One person said on Twitter: “That’s really annoyed me. Ring in about a dog or a cat you get a serious answer. Ring in about a hamster you get pathetic, childish giggling. Hamsters get ill too.”

Another wrote: “How utterly disrespectful of the on air vet & @alisonhammond to laugh hysterically at a viewers phone in regarding their pet.”

One tweeted: “Oh dear, I love Scott, but that was very unprofessional.”

However, others saw the funny side and were in hysterics watching.

One added: “@thismorning I’m hysterically laughing at them laughing.”

Read more: This Morning viewers praise Andi Peters and plead with show bosses to keep him

Another wrote: “The vet laughing his head off on @thismorning made my morning that has.”

A third laughed: “@thismorning that was hilarious. How a hamster made my morning.”