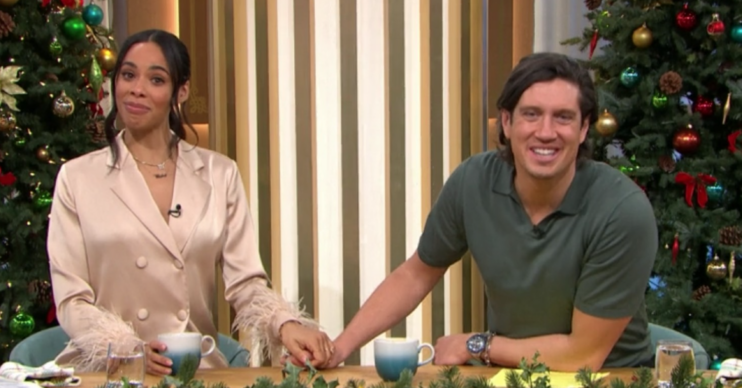 This Morning: Vernon Kay comforts Rochelle Humes as she cries during emotional segment

It was an emotional segment

Vernon Kay comforted co-host Rochelle Humes on This Morning today (Wednesday December 15), after the presenter became emotional during an interview with a man raising money for his sick wife.

Rochelle, 32, needed to take a moment and Vernon – like any good co-host – was on hand to help out.

What happened on This Morning with Rochelle today?

Earlier in the show, Vernon and Rochelle interviewed Scott Fisher, who was running 27 marathons in 27 days for his wife, Megan.

When she heard the couple’s story and revealed that This Morning would be donating £1,000 to Scott and Megan’s cause, Rochelle welled up.

Then, in an update later in the show, Vernon said that Megan had taken a turn for the worst and had gone to a specialist hospital.

However, they told Scott that since the earlier interview, This Morning viewers had logged on to his JustGiving page.

At the end of the interview, Scott thanked all the This Morning crew for their help, and paid tribute to family and friends.

He urged his wife to keep going, and said that the money viewers had pledged had “blown his mind”.

And that’s when Rochelle got emotional.

Taking a deep intake of breath and clutching her chest, she said: “Every time… it gets me.”

Read more: This Morning viewers deliver their verdict on Vernon Kay and Rochelle Humes as hosts

As she began to tear up and struggled to introduce the item, she said to Vernon: “You might have to do this.”

Vernon reached over and held her hand as she took a moment.