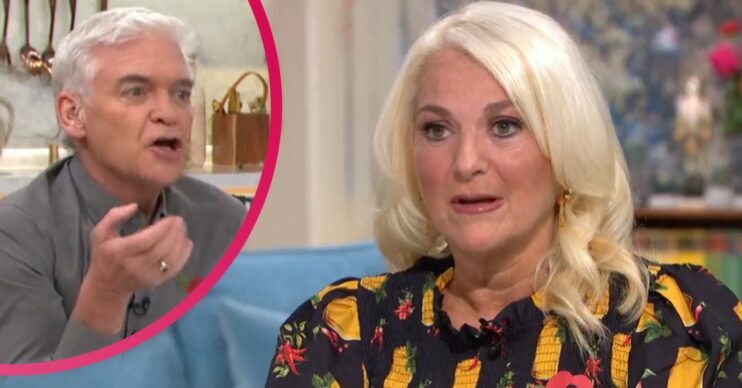 This Morning viewers mocked Vanessa Feltz over her dress choice on today’s show.

Vanessa appeared on the ITV show in a black dress with yellow and red print on it, which seemed to resemble vegetables.

But fans were not impressed with the look, blasting her for reminding them of sweetcorn, amongst other things.

Vanessa divided This Morning viewers with her dress

One watcher took to Twitter to say: “I keep seeing sweetcorn whenever I look at Vanessa Feltz’s dress.”

Another added: “Wife thought they were pints of lager on her dress.”

And another said: “I thought they were corn on the cobs. Were they pints?”

QOTD: Are you team Salt and Vinegar crisps or Roast Chicken? Or maybe something else? Make sure to vote below! 👇 pic.twitter.com/LLuoQgXVn5

I thought they were corn on the cobs. Were they pints? 😂🥲

As well as being an agony aunt in the phone-in segment, Vanessa was on the show to talk about the national crisp shortage which has hit British supermarkets.

Her views on crisp flavours also left viewers divided when she shot down host Phillip Schofield for saying his favourite is roast beef.

She added: “No one’s is roast chicken.”

Why is there a crisp shortage in the UK?

Holly Willoughby quickly jumped to her co-host’s defence, saying that when model David Gandy was on the show, he said roast chicken was his fave too.

And her opinions certainly got viewers on Twitter talking.

“WHAT! No chicken crisps!!!! Vanessa you don’t know what you’re missing!” added another.

And a third tweeted: “I’m with Phil… so STFU Vanessa!!”

What happened during yesterday’s Spin to Win?

Yesterday, Phil and Holly were left in hysterics when a caller turned the air blue.

Many viewers were also tickled by the caller, who rang in to take part in the Spin To Win segment.

But she accidentally swore… twice! And some of those watching at home were so entertained they even hailed the sweary slot as the ‘best ever’ broadcast on the show.

She sweetly requested a portion of any winnings be donated to emergency services charities.

But Linda left the hosts in hysterics as she branded the ‘Bag of Shizzle’ the ‘Bag of [bleep]’.

Phil, who had descended into giggles, said: “We’re all thinking it, Linda.”

But as Linda swore again, Holly urged: “Don’t say it again!” as she held a forefinger to her mouth as if to shush Linda.

But by this point, Phil had completely lost it and was hooting, covering his mouth with a hand.