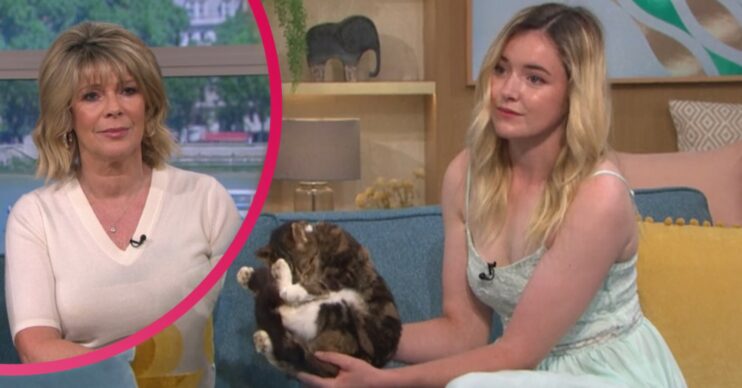 Chloe Lee appeared on the show with her late cat Nicky

Viewers of This Morning were left shocked today after a guest brought her dead cat on the show.

Chloe brought along her dead cat Nicky to join her on the sofa as she explained her trade to Eamonn and Ruth.

Nicky was Chloe’s pet for 16 years before passing away. She had owned her since she was a kitten and didn’t want to let go so subsequently decided to stuff the cat herself.

Talking about her decision, she explained to Ruth how it gave her comfort knowing Nicky was now with her forever.

She said: “So much comfort because I just hated the fact of parting with my animals, burying them and never seeing them again.

“So having her in the corner of the room, stroking her and just looking at her, that for me is really great.”

Probing her further, Eamonn said: “I can see nothing wrong with having your pet taxidermied but you did her yourself?”

Eamonn continued: “Was that not a bit gruesome and a bit too close for comfort?”

She explained: “It was a bit graphic. It was kind of a mental barrier to get over that but because I’ve been doing taxidermy a while I knew what I was getting into.

“I kind of look forward to it, like I’m gonna see her now like this, in this state but I’ll be able to preserve her and she’ll look pretty and she’ll be remembered and loved.”

Viewers of This Morning took to Twitter to air their shock at the segment which also saw Chloe showcasing some of her other ‘creations’.

One user wrote: “Quite traumatised looking at this stuffed cat, and then looking at my very alive cat right next to me!!

Another said: “I had to switch channels with the woman and her stuffed dead cat, some things are too gross for TV!!”

Another added: “What the [bleep] did @thismorning just show on TV?! With no warning? I feel sick and had to change the channel!”

However, not everyone was shocked by what they saw. One viewer was keen to praise Chloe for her work.

They said: “What a beautiful job Chloe has done at preserving her cat Nicky. Not for everyone, but for those who like the idea I think her work looks great.”