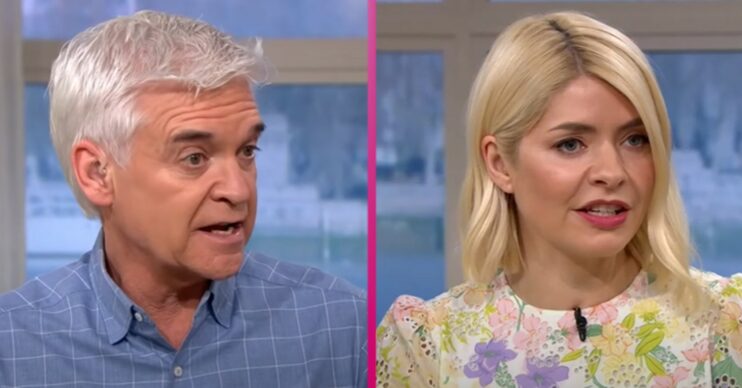 Where are Phillip Schofield and Holly Willoughby on This Morning? Duo replaced today

Holly and Phil will be back on April 19!

This Morning returned for a new week today but Holly Willoughby and Phillip Schofield aren’t hosting for the next two weeks.

Instead they’ll be replaced by some familiar faces.

But where are Holly and Phil?

Where are Holly and Phil on This Morning today?

Phil and Holly are on their annual Easter break for the next two weeks.

Alison and Dermot will host the daytime show all week from today (April 4).

Meanwhile, next week (April 11 to 14), Josie Gibson will be presenting the show alongside Vernon Kay.

Alison and Dermot will also be back to host the bank holiday shows on Friday April 15 and Monday April 18.

When will Phil and Holly return?

Holly and Phil will be back on screen on April 19.

As today’s show started, viewers shared their thoughts on Alison and Dermot and they were divided.

One person complained on Twitter: “Gonna be a long [bleeping] week.”

Another wrote: “Don’t tell me we have these two all week.”

A third tweeted: “Well I was looking forward to watching #thismorning while I’m ill, and just seen Alison is on so it’s a no from me.”

However, a fourth said: “@thismorning love you Alison!”

Another gushed: “@thismorning These two @AlisonHammond and @radioleary,” followed by a heart face emoji.

Both stars have been a hit with viewers after hosting several episodes.

“I’m very thankful to all the This Morning team for letting me come back and host.

“As for Vernon, when they said I’d be hosting with Vernon again I screamed with excitement! What a legend.”

Vernon said: “I had the most brilliant time hosting This Morning with Josie before Christmas and I’m chuffed to be asked back again.

“The show is such an institution for many and I’m really looking forward to seeing the team and interacting with the viewers again over Easter.”

Are you happy Alison and Dermot are hosting this week? Leave us a comment on our Facebook page @EntertainmentDailyFix and let us know.