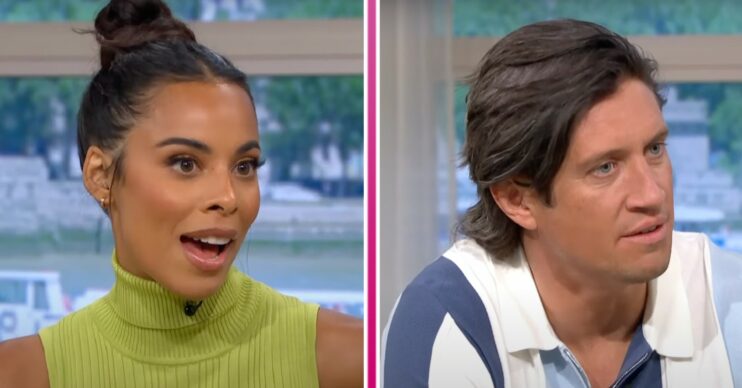 It didn't go down well with those watching at home

This Morning hosts Vernon Kay and Rochelle Humes discussed the cost of living crisis during the show today (August 3).

However, viewers were not happy – with many even finding insulting that they were even talking about it.

Today’s edition of This Morning saw Vernon and Rochelle hosting once more.

At the beginning of the show, the duo welcomed Simon McCoy and Sonia Sodha onto the programme.

Together, the four of them discussed the day’s biggest news stories – including the cost of living crisis.

During their discussion, they spoke about how “energy shaming” could or couldn’t help people cut down on their household bills.

One viewer commented: “What if you’ve got a seriously ill child or elderly relative that you need machinery on all the time for? Or you’re running a business from home?

“Of course you’re gonna use more energy, but you shouldn’t be shamed or pressured over it.”

“How crazy is the idea of ‘energy shaming’. We have neighbours that have two or three people in their house, we have six. So how can you compare?” said another.

The presenters also spoke about the struggles people were putting up with to stay on top of the cost of living crisis.

However, viewers weren’t happy – and claimed to know the contents of the hosts’ bank balances to boot!

Viewers did not appear to appreciate Rochelle and Vernon discussing the cost of living crisis on today’s programme, mainly because they are “millionaires”.

Many argued that the presenting duo aren’t able to sympathise with what people are going through, and were offended that they even attempted to do so.

“I don’t wanna hear Rochelle talk about people struggling and the cost of living crisis when all she does is flaunt her wealth and fancy lifestyle on the ‘gram,” one viewer tweeted.

“I find it really hard to relate to people like Rochelle Humes and Vernon Kay when they talk about financial crisis and struggling with fuel prices etc…. These people are multi-millionaires…They don’t have to struggle!” another claimed.

“Millionaires discussing hardship with the prices of petrol so infuriates me,” another ranted.

This week’s This Morning saw yet another presenting shake-up take place.

Last week, Craig Doyle hosted the show alongside both Josie Gibson and Mollie King. This week, however, is Rochelle and Vernon’s turn to front the show.

Viewers were divided when they saw who would be hosting the show on Monday morning (August 1).

Some were delighted. “Lovely to switch on and find Rochelle and Vernon on my screen,” one viewer tweeted.

However, some were less happy.

“Vernon is not very good at presenting. Rochelle constantly having to jump in to save him. Get Craig [Doyle] the absolute pro back ASAP,” one viewer tweeted.

“Watching Rochelle makes you crave for Josie,” another wrote.