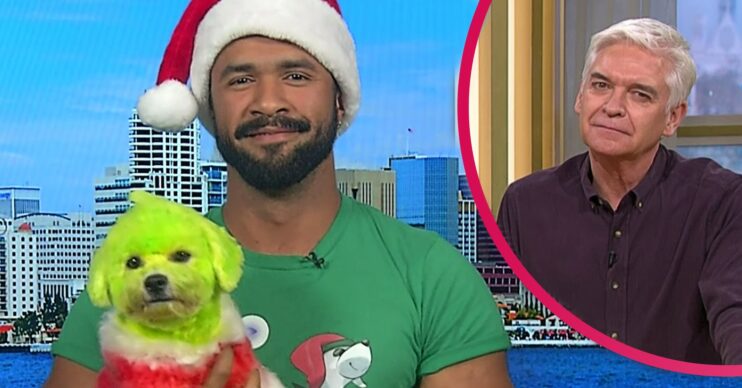 This Morning viewers have today branded the practice of dying a dog different colours to make it look like The Grinch as “animal cruelty”.

The groomer, from the US, appeared on today’s show (Friday December 9).

He introduced Charlie, who he had been dyed green and red to look like The Grinch.

Subsequently, host Holly Willoughby said to Gabriel: “It’s funny isn’t it, even within here… the image of that dog dressed as The Grinch with its hair dyed the same colour caused a very different reaction.

“This is something you’re used to isn’t it, this divides people’s opinions.”

“Yeah, actually I was surprised at the reaction on the internet,” Gabriel replied.

“The Grinch look… a lot of people are very happy, and I got a lot of calls from people who wanted to bring their dog to make their dog a Grinch.”

However, he also said: “But there are a lot of people out there who are concerned about what dye I’m using, should we do that to a dog?”

Phillip Schofield then asked what kind of dye he uses and whether the dogs are happy.

I hope that dog is taken from its owner by an animal charity. Animal cruelty, plain and simple. #ThisMorning

Dying you’re dogs hair.. not sure that is the best thing to do to be honest.. feels abit like cruelty #ThisMorning

Shame on @Schofe and @hollywills for not calling out the animal cruelty on that poor dog! They can sod off, glad its their last show of 2021! #thismorning @RSPCA_official

Despite Gabriel’s reassurance, viewers did not take to Charlie and his colouring.

One viewer said: “I hope that dog is taken from its owner by an animal charity. Animal cruelty, plain and simple. #ThisMorning.”

Another added: “This is ANIMAL CRUELTY it’s not funny or cute. Poor dog #ThisMorning.”

Furthermore, a third even lambasted hosts Holly and Phillip.

“Shame on @Schofe and @hollywills for not calling out the animal cruelty on that poor dog!

“They can sod off, glad it’s their last show of 2021! #thismorning @RSPCA_official.”

However, one person said: “Tbh the dye was totally safe to be used on the dog.”

Another added: “Why are people stressing? If it’s safe then there’s no problem.”