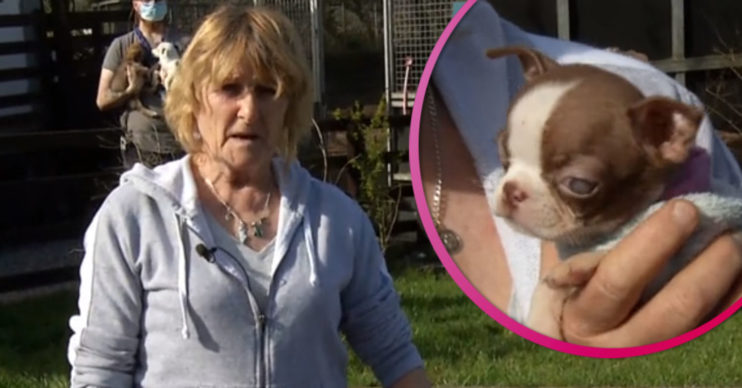 Some had been brought in following the death of their owners

On This Morning today, viewers were left emotional over a group of dogs who had been left at a rescue centre.

Many Tears Animal Rescue owner Sylvia Van Atta appeared on the programme as she’s desperate to rehome some of the 56 dogs in their care.

Sylvia said it’s been a “struggle to keep going” during the coronavirus pandemic.

Sylvia had 15 dogs brought in after their owners sadly took their own lives.

Sylvia said: “Right at the beginning I thought we wouldn’t be able to keep going, we haven’t got the funds to keep going so I wrote a book about how we started the rescue.

“I thought it would be a good thing to fund it and also inspire others to believe to achieve.”

She continued: “Just as I thought, the dogs coming in have not been properly socialised, trained and nobody’s been there to advise and they come in with problems.

“Not all of them. A lot of them come in because people can’t finance their wellbeing and sadly there have been a lot of mental health problems, including suicides where we’ve had to have the dogs.”

Host Phillip Schofield explained: “You’ve had 15 dogs where owners have taken their own lives. Usually that would be one every three years.

“That’s a massive and tragic increase.”

Which dogs are in need of a home?

Meanwhile, Sylvia also had puppies brought in who had three homes before they were 18 weeks old.

Sylvia then showed off some of the adorable dogs that are up for rehoming at the centre.

There was a two-year-old Greyhound and an eight-week-old Cockapoo pup.

She said: “She is probably a dwarf puppy, her life expectancy probably isn’t very much.”

I’m in tears after your dog rehoming segment…so many unwanted dogs and then scum steal other peoples dogs for possible puppy farms. If you really want a dog give your money to a charity not puppy farms…send them out of business #AdoptDontShop #ThisMorning #DogsofTwittter

Seeing all those dogs&pups on #thismorning is so heartbreaking , hope they all get a good home they deserve, id take them all if I could

This is breaking my heart, I would rehome them all #thismorning gorgeous doggies.

Viewers were left in tears watching the segment.

One wrote on Twitter: “I’m in tears after your dog rehoming segment… so many unwanted dogs and then scum steal other people’s dogs for possible puppy farms.”

This is breaking my heart, I would rehome them all gorgeous doggies.

Another said: “So sad seeing the amazing rescue Many Tears on TV this morning… it just reinforces how you should always adopt and never buy dogs.”

A third added: “Seeing all those dogs & pups on #thismorning is so heartbreaking.”