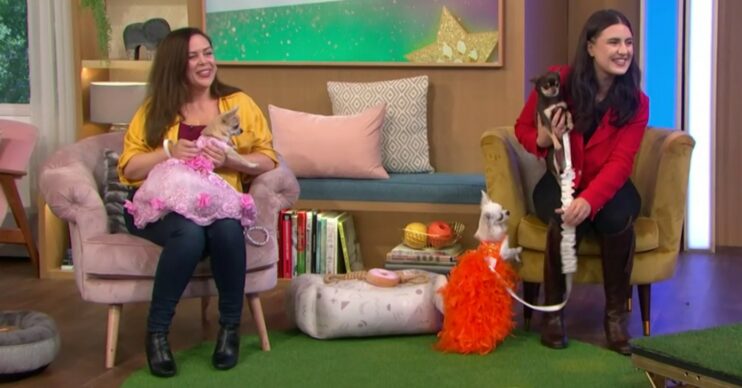 Some viewers of This Morning today were left shocked after a segment of the show featured dogs dressed up and put on display.

The segment on Tuesday’s show (August 31) saw hosts Rochelle Humes and Eamonn holmes hosting a Chihuahua beauty pageant – and viewers were not impressed.

Fans of the show were shocked to see the pooches parading around in dresses as dog events organiser Kerry Brook filled them in on the competition.

Furious fans then took to Twitter to air their disgust at the feature. Some even accused the show of promoting animal abuse.

Read More: This Morning: Beverley Turner divides viewers as she clashes with doctor in vaccine debate

Another continued: “What is wrong with these people dressing up dogs in dresses, they are animals and treating them in this way is cruel. These people should buy themselves Barbie dolls and dress them instead.”

A third ranted: “Don’t care what people say, oh it’s cute, oh it’s harmless, it’s so wrong!! You do not dress up a dog because not only do they look stupid, they are not a play thing!

“They’re a fecking dog just take them out to the park for a run-around, it’s so pointless!”

The hate didn’t stop there as more viewers joined the hoards of complaints filtering through the social media site.

One posted: “Dogs are not a fashion accessory and  This Morning is being really irresponsible encouraging viewers to dress dogs like dolls. Also exposing the dogs to stress unnecessarily on TV. Disgusted! This Morning is becoming trash TV.”

Read More: This Morning viewers are convinced Rochelle Humes flashed her knickers on the show today

Another continued: “Putting your dog in a clown outfit for ‘fun’ is for your own fun, not theirs.”

One concerned viewer noted: “She looks terrified bless her.”

And another was quick to point out their disdain at spending so much money on frivolous things. Especially when the world has far bigger problems.

They wrote: “Spending £100 on dog dresses when people are queuing for food banks We truly lost our way.”

Not everyone was against the telly strand though. One viewer said: “I think they’re so sweet. My dog doesn’t sit like that, he’s too hyper.”

And another argued: “I’ll say it again. I’d much rather see loved dogs like this rather than hear about the cruelty. A chihuahua won’t let you do anything it doesn’t want you to either, feisty af.”

What do you think of the dressed up chihuahuas on This Morning today? Head over to our Facebook Page @EntertainmentDailyFix and leave a comment to let us know!