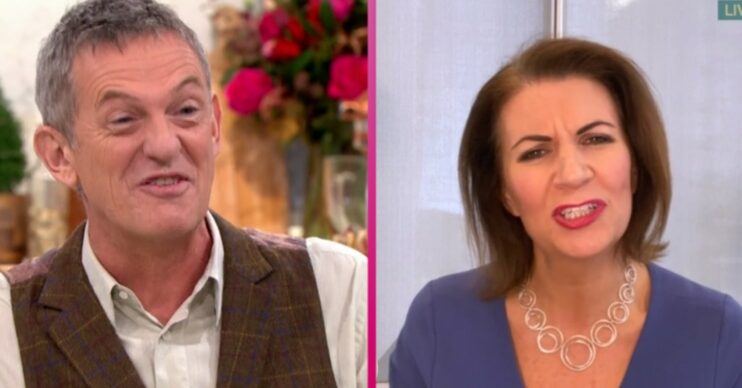 Julia and Matthew didn't agree on one topic

This Morning is under fire from viewers today after Julia Hartley-Brewer clashed with Matthew Wright over mask-wearing.

Fans of the hit ITV show were not happy after the controversial presenter was involved in a debate surrounding masks on today’s (Monday 22 November) show.

Why was Julia Hartley-Brewer on This Morning today?

Julia, 53, appeared on This Morning today to talk about the day’s biggest stories, including the riots in Austria.

The riots currently happening in Austria are due to the country having gone into another lockdown to combat infections. The lockdown is expected to last around 10 days. It is Austria’s fourth lockdown since the pandemic began.

People in the country have been rioting in protest at the restrictions that have been imposed.

Appearing on the show, Julia said that she wants the Covid booster jabs to be rolled out to those who need them, but she also wants the government to say they will “never lockdown again”. She also said she doesn’t want mandatory jabs either.

What did Julia and Matthew clash over?

She said: “We all need life to be back to normal and to know it’s going to stay normal and not have that Sword of Damocles over us constantly.”

Matthew Wright argued that normality has now changed. He then went on to say that he had seen Prime Minister Boris Johnson walking around without a mask, despite: “All the studies show now that masks have a significant reduction of viral transmission, why wouldn’t you want to lead by example?”

Julia, however, disagreed with Matthew, which sparked their clash.

“No, I’m sorry, they don’t,” Julia said, but Matthew interrupted her.

“Well, they do! 11% the doctors are saying! More effective than social distancing and hand washing,” Matthew argued.

Julia then went on to say that she agreed that medical-grade masks stop transmission, but ‘bits of cloth’ that the public wear does not. She said that she had read all the studies, to which Matthew replied, “You haven’t read them carefully enough, Julia, with respect.”

“If masks worked, we wouldn’t have rising cases in Europe where they’ve had mask mandates for months,” she said. Matthew then ran off some facts about masks, but This Morning hosts Holly Willoughby and Phillip Schofield were keen to end the debate there.

“You have to agree to disagree,” Phillip said.

This Morning viewers on Twitter were not happy with what they saw and were quick to say so.

“Why do This Morning invite you on?” one viewer asked Julia. “You are beyond contradictory in what you say.”

“Shame on you giving Julia a platform to share her anti-mask anti Covid bull,” another viewer tweeted This Morning.

“This Morning can [bleep]. Seriously, they are part of the problem with COVID/POLITICS – to give Julia Hartley-Brewer a platform to sprout her [bleep] is a joke.”

This isn’t the first time Julia Hartley-Brewer has caused controversy after an appearance on This Morning. On November 8, she came under fire for comments she’d made about Prince Harry. She accused him of using his royal connections to make ‘a load of money’ after he signed a contract with Netflix.

What did you think of Julia’s comments on This Morning? Leave us a comment on our Facebook page @EntertainmentDailyFix and let us know what you think.