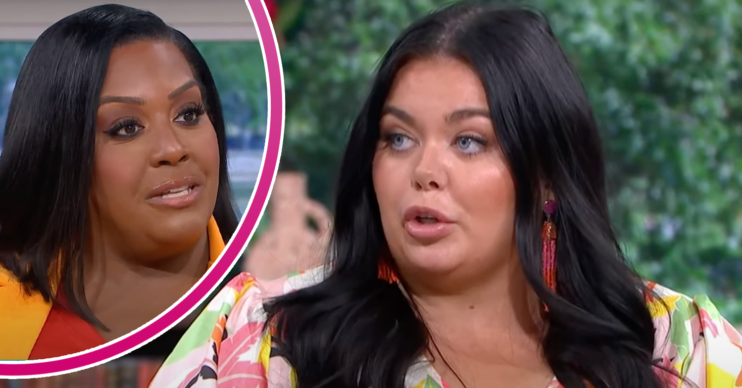 Scarlett was on to talk about her new documentary, Britain’s Tourette’s Mystery: Scarlett Moffatt Investigates.

However, the star was cruelly fat-shamed on Twitter as she sat on the This Morning sofa.

Scarlett Moffatt on This Morning today

The former Gogglebox star looked gorgeous in her summery floral outfit as she chatted to Alison and Dermot.

During the chat, Alison revealed that her son Aiden had suffered from tics as a child, too.

She said that she ignored the condition and it just happened to go away.

Scarlett fat-shamed after This Morning appearance

However, while many praised the interview for raising awareness, a cruel few pointed to Scarlett’s appearance.

One commented: “What happened to skinny Scarlett?”

Another cruelly said: “Scarlett MofFATt!!!! Another non-entity on TV!”

However, the bubbly star’s fans more than had her back.

“I KNEW I’d find some of you nasty [bleeps] fat shaming poor Scarlett. Shame on you, you never fail Twitter trolls, do you,” one said.

“There’s been a lot of them the past couple of weeks,” said another.

“Been quite a few, didn’t surprise me at all,” said another.

“Size shouldn’t matter, unless it isn’t really badly affecting their life,” another declared.

Others commented on how lovely Scarlett looked on the show – and what a lovely person she is on the inside, too.

“Watching @thismorning. How lovely is #Scarlettmoffatt? Beautiful too,” they said.

Tears over her weight gain

Scarlett has previously admitted “breaking down in tears” as she faced up to her weight gain.

She made the comments ahead of her three-stone weight gain back in 2017.

Scarlett said: “I couldn’t face up to my weight either, so when I did, it was a bit emotional.”

What did you think of Scarlett’s appearance on the show today? Tell us on our Facebook page @EntertainmentDailyFix.