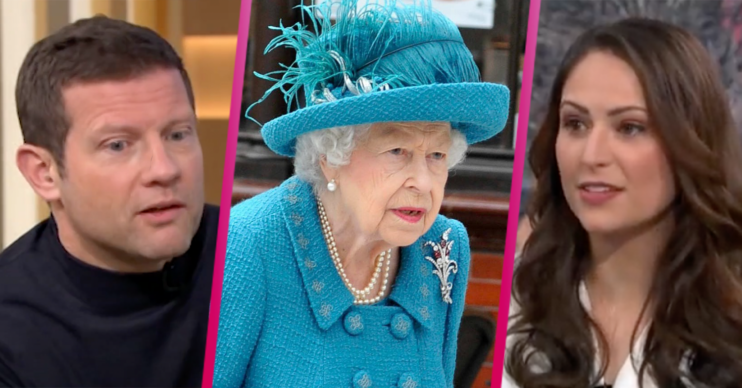 Nicola Thorp said the Queen had just recovered from COVID

Today on This Morning guest Nicola Thorp made a huge blunder when she was talking about the Queen.

Nicola’s incorrect announcement about the monarch caught the attention of host Dermot O’Leary, who pulled her up on the comment.

Viewers at home picked up on it too and quickly took to Twitter to slam Nicola – and her comments.

What did Nicola say on This Morning today?

Nicola was speaking about the audience the Queen hosted yesterday.

Commenting after a clip of the Queen looking a little frail aired, Nicola said: “So yeah she’s just recovered from COVID, don’t forget.

He said: “Just one correction Nicola, it’s just been in my ear, I think you said the Queen had COVID.

She then sent an apology to the monarch, saying: “I’m so sorry HM!”

Of course, Prince Charles last week revealed that he had contracted COVID-19.

A few days later, his wife Camilla, the Duchess of Cornwall, tested positive.

How did This Morning viewers react to the gaffe?

Not well, it has to be said.

“The delightful Nicola Thorp announced the Queen has just recovered from COVID,” said one.

Who is this stupid woman on This Morning today?!

“Did this awful woman say ‘the Queen has just recovered from COVID’?” asked another.

A third asked: “Have I missed something Nicola, when did the Queen have COVID?”

“Who is this stupid woman on This Morning today?!” said another.

Another asked: “Why is this Nicola saying the Queen had COVID?”

“Erm the Queen didn’t have COVID tho?” questioned another.

“When did the Queen have COVID? It was Charles and Camilla wasn’t it?” another asked.

“Since when did the Queen have COVID? News to me!” slammed another.

So did the Queen have COVID?

Buckingham Palace has never announced that the Queen has had COVID.

Last week, when the news about Prince Charles came to light, officials revealed that she had no symptoms.

This is because she spent time with her eldest son a couple of days before his positive test.