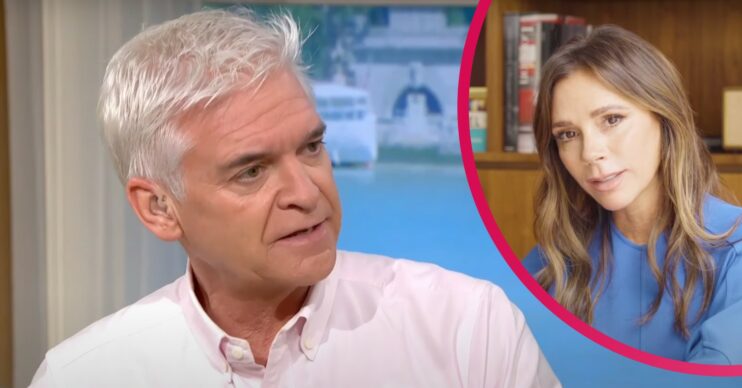 Phillip’s subtle dig at the fashion designer came after Victoria branded wanting to be thin as an “old fashioned attitude”.

Ahead of the launch of her new VB Body shapewear collection, Victoria described the desire to be “thin” as an “old fashioned attiude”.

Speaking to Grazia magazine, she said: “It’s an old-fashioned attitude, wanting to be really thin. I think women today want to look healthy, and curvy. They want to have some boobs – and a bum.”

She then went on to say that there are lots of curvy women in Miami, where she lives half the time with her husband David.

She described the way that these women show off their curves as “liberating”.

Victoria’s comments received some attention and were a subject of discussion during today’s edition of This Morning on ITV.

Phillip Schofield on This Morning

During today’s edition of This Morning, Phillip, Holly Willoughby, and Camilla Tominey sat down to discuss Victoria’s comments.

“She’s described the desire to be very thin as an old-fashioned attitude, saying women now want to be curvy. Is there a shift now?” Holly asked.

Camilla agreed, saying that that was the “problem”.

“This is somebody that eats grilled fish and steamed vegetables for every meal,” she said.

“So I get what she’s trying to say but I think it’s a bit rich for Victoria Beckham to be thinking about body image when she hasn’t always projected this idea of a woman that loves her food.”

Elsewhere in the show, Phillip made another controversial comment – and this one grabbed viewers’ attention.

During today’s show, This Morning gardener Daisy Payne presented a segment on how to get rid of box tree caterpillars.

“They are a really troublesome problem,” she said, before suggesting that birds should be encouraged into the garden to eat them.

It was at this point that Phillip interrupted, asking how the caterpillars can be killed. Daisy explained that killing them is a last resort, but Phillip wasn’t convinced.

“It’s not a last resort, it’s a first resort! They’re not supposed to be here, they’re stripping the hedges, kill them!” he argued.

It’s safe to say that viewers were livid with the 60-year-old’s comments.

“Phil saying ‘kill them’ live on TV is promoting animal cruelty! Leave the caterpillars alone! They’re harmless and they grow into beautiful butterflies and moths. The wally,” one viewer tweeted.