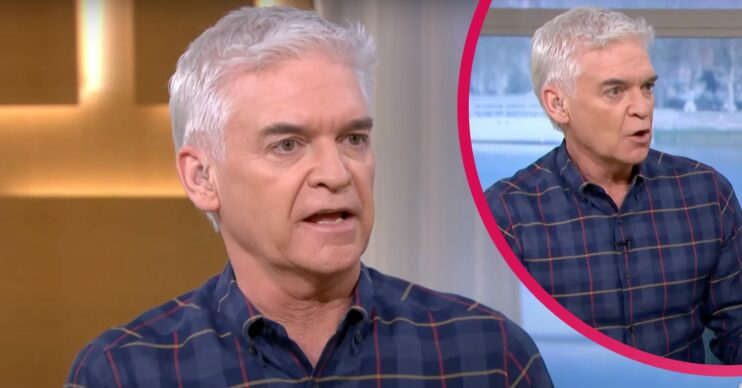 Phillip Schofield took aim at the government during This Morning today (Thursday, March 10), branding it “shambolic” over its dealing with the refugee crisis.

The 59-year-old accused the UK government of “failing” Ukrainian refugees during a heated rant on the show.

What did Phillip say on This Morning today?

Phillip and Holly Willoughby, joined by Camilla Tominey and Tom Swarbrick, talked about the Ukrainian refugee crisis on This Morning today.

“One of the big things that are being discussed at the moment is that this extraordinary situation we have on our borders of refugees fleeing the Ukraine and grabbing whatever they can,” Phil said.

“Sadly, some of them appear not to have been able to bring their childhood vaccination certificates to get in the door,” he added sarcastically.

He then went on to read out some stats about what other countries have been doing to help Ukrainian refugees.

“But in the home office, the UK has granted visas to 850 Ukrainian refugees under its scheme

What was said next on This Morning today?

Phillip continued to hit out at the government and how little they’ve helped Ukrainian refugees compared to other European countries.

“It said that 22,000 applications for Ukrainians to rejoin their relatives have been started but this application process – God knows how long it takes while these people stand out there in the snow waiting to find out whether they can get in.”

Phillip then delivered his opinion on the matter, which everyone in the studio agreed with.

“It looks like it’s completely bureaucratic shambolic,” he said.

Camilla then went on to say that the Home Office “is an absolute basket case”.

What else did Phillip say on This Morning today?

Later on, speaking in the Commons, the home secretary Priti Patel said that from Tuesday (March 15), refugees trying to get into the UK, who hold a national passport, will be able to complete visa applications online.

Priti Patel’s announcement didn’t go down well with those in the This Morning studio, including Phillip, who slammed it.

“You can apply exclusively online. It’s gonna take you five days to get a result. Where are you going to stay? It’s freezing cold. What do you do with your family in those five days? What do you eat?” he asked.

2.1 million Ukrainians have fleed their homeland. However, the UK has reportedly only granted 1,000 visas so far.