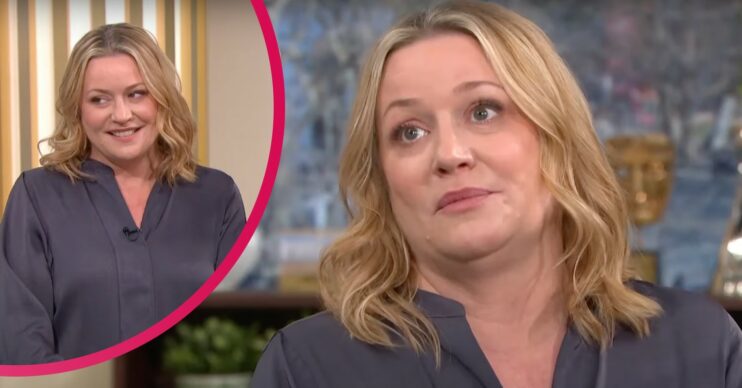 Bemused This Morning viewers were asking the same question about Laurie Brett and her accent following her  appearance on the show today (Tuesday, February 15).

Viewers were confused over the fact that the Scottish actress was speaking with an English accent during the interview!

Now, EastEnders’ former power couple is set to be reunited on stage.

They will be playing a married couple in a play called Looking Good Dead by Peter James. The play is a murder mystery and is currently touring the UK.

“It’s been like putting on a comfortable pair of old slippers,” Adam said of acting alongside Laurie again.

“Or a comfortable pair of stilettos, perhaps,” Laurie laughed.

What did Laurie and Adam say about working together?

The duo then spoke about how much they’d missed the theatre during the pandemic.

“It’s just great to be on stage,” Laurie said. “I mean, come on, we’re supposed to be the theatrical centerpiece of the world and it just came to a grinding halt.

“And to see it start to get back on its feet again […] the public absolutely love it.”

“I think it would be sort of easy and cheap to say ‘oh, it’s just Ian and Jane on stage’ – we look the same, we sound the same, but these characters are very different,” Laurie said.

“The dynamic of their relationship is entirely different,” she said.

What did viewers say about Laurie on This Morning today?

However, it wasn’t Adam and Laurie’s reunion on TV that got some viewers talking – it was Laurie’s accent!

Laurie was born in Hamilton, Scotland, yet in today’s interview, she was speaking with an English accent. Bemused viewers took to Twitter to discuss it.

“If Laurie is Scottish why is she talking in a southern accent?” one viewer asked.

“Laurie was born in Hamilton Scotland, so where’s the accent then? Is she doing a John Barrowman?” another asked, in reference to John Barrowman‘s habit of switching from his American accent to his natural Scottish accent when talking to Scots.

“Why is Jane talking like David Tennant‘s Doctor Who? I thought she was Scottish?” another said.

There’s a simple answer to viewers’ confusion. Laurie has stated in the past that she has always had a “knack” for accents, and simply puts on an English accent when in London.