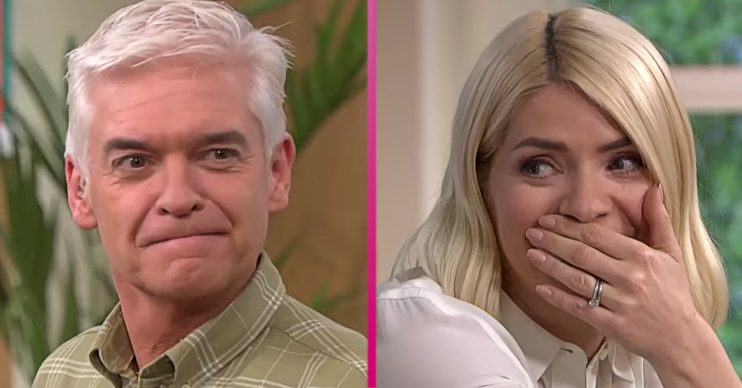 Phil's getting angrier and angrier each day!

This Morning today saw Holly Willoughby call co-host Phillip Schofield “brutal” after he cut off a caller during Spin to Win.

The popular competition segment has, over the last year, produced some epic fails.

And in today’s show (Tuesday May 25) there was another one, which Phil finally lost his rag at.

As ever, Phil and Holly explained the rules as the production team lined up the first caller.

They explained to viewers not to say “hello” when they pick up the phone, just tell them the password straight away.

“If your phone rings you need to remember to say today’s password.”

When Mark picked up the phone he said “hello” and Phil ran towards the camera screaming.

Holly sighed: “How many times??! For goodness sake’s Mark…”

Why did Phil lose it?

It was time to try again.

When a woman picked up the phone she also said, “hello”.

Astonished, Phil asked, “what the hell is going on?!”

What the hell is going on?!

When Katie said yes, Phil said goodbye and cut her off.

With Holly and the crew collapsing into giggles, she told her co-host: “That was so brutal!”

They tried a third caller – who also said “hello” – prompting Holly to ask if it was a wind-up.

Viewers were divided over Phil’s behaviour, with one writing on Twitter: “Hey @ITV, I hope you’re going to have words with Phillip after that. Was there really any need for him to be so rude?”

Another said: “Phil is so rude; stop screaming at people!”

However, one defended Phil adding: “Phil was not being rude. Don’t enter Spin to Win if you’re not gonna say the phrase.”

It’s not the first time this week Phil has become angry with Spin To Win contestants.

Only yesterday (Monday May 24) he bit back at a viewer who failed to say the password upon answering their phone.

He exclaimed: “Come on! What’s the matter with you?! What did you enter for?!”

This didn’t go down well with some viewers.

One said on Twitter: “Much as I’m a big fan of Phil and Holly, they’re unspeakably rude to callers who get it wrong on #SpinToWin sometimes.”