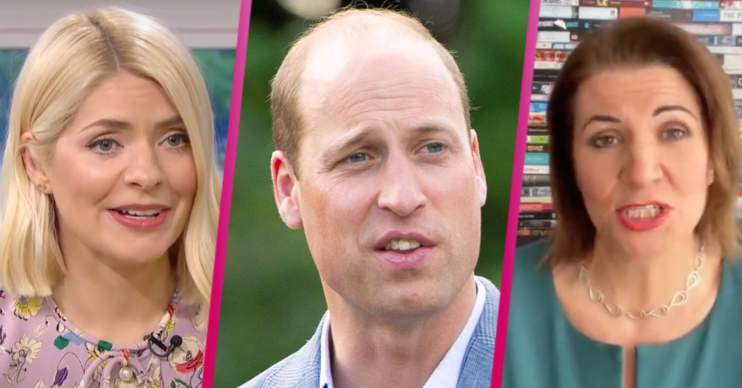 This Morning today: Guest under fire over ‘terrible’ comments about Prince William

This Morning came under fire from viewers today for a segment that discussed “buff” Prince William getting his COVID jab.

Holly Willoughby and co-host Phillip Schofield hosted a segment on the day’s news alongside Julia Hartley-Brewer and Matthew Wright.

And one of the topics just happened to be about William getting his COVID vaccine.

Holly opened the segment by saying: “Prince William has had his first COVID vaccine.

“Now, obviously this is great, it encourages other people to have their vaccine.

Read more: Holly Willoughby admits she drinks during parents’ even and likens it to ‘speed dating’

“But I was looking this morning on their Instagram page and I couldn’t help but have a little smile at the comments underneath.

“It wasn’t congratulation on your vaccine, it was: ‘Oh Prince William works out’, ‘looking pretty buff Wills’, ‘sun’s out, guns out’, ‘hubba hubba’ and ‘no wonder the Duchess of Cambridge always looks so happy’,” Holly giggled.

Commenting on the picture Matthew Wright declared: “They’re not huge.”

To which Holly drooled: “He looks good, he looks like a strong strong guy.”

“Is there an element of tensing?” asked Phil.

“All jab no flab Prince William,” Julia Hartley-Brewer chipped in.

‘The years haven’t been kind’ to Prince William

She then added: “I know Holly will back me up on this, he was a hottie at 18.

“I’m glad he bagged Kate when he did because the years have not been kind to him.”

I’m glad he bagged Kate when he did because the years have not been kind to him.

With the hosts looking pretty shocked, she continued: “I’m sure he’s a wonderful man but on the hair front, the years have not been kind.

Read more: Holly and Phil stunned as Spin to Win caller hangs up on them

“But he’s clearly been looking after himself.”

Matthew chipped in: “It’s such a shame he’s out there to push the message across and the media just give it: ‘Oh look at his muscles.'”

Holly added: “Welcome to life as a woman.”

So how did viewers react to the This Morning segment?

Many commented on the fact that This Morning host Holly appeared to be swooning over the Duke of Cambridge.

Memes quickly appeared on social media suggesting that the This Morning host was drooling over Prince William.

Others, though, took issue with Julia’s comments and said there would be outrage if a man spoke about a woman like that on national TV.

“Julia Hartley-Brewer just said that time hasn’t been good to Prince William about the hair?? I have no words!” said one viewer.

Another added: “And the years haven’t been kind to you either Julia, only you’ve got a disgusting judgemental personality as well.”

A third said: “What a terrible thing to say Julia. I’m sure you still look like you did at 18.”

Another said: “So disappointed. Every person mentioned in the past 5 minutes has been judged on part of their appearance. It was JUST mental health awareness week. DO BETTER.”

A second also picked up on the contradictory nature of the comments from Julia.

“I’m sure they wouldn’t have negatively commented on a woman’s appearance or hair in that way,” they said.

“Imagine the comments if a man started talking about a woman like this on national telly,” a third echoed.

What did you think of the segment on This Morning today? Tell us on our Facebook page @EntertainmentDailyFix.