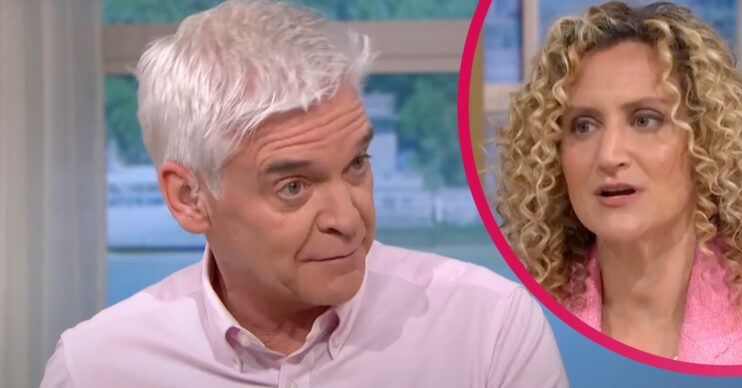 This Morning viewers accuse show of ‘scaremongering’ with segment: ‘People will panic!

This Morning viewers were furious today with one particular segment about pets during the show.

Many accused the show of “scaremongering” after they made a link between hepatitis and dogs.

During today’s edition of This Morning, Phillip Schofield and Rochelle Humes welcomed Dr. Ellie on to talk about all the latest health headlines.

One of the topics of discussion the trio spoke about was the possible link between dogs and a spike in hepatitis cases in children.

More than 160 cases have been recorded in the current outbreak, but the reason for this increase is unclear.

Read more: Holly Willoughby replaced on This Morning all week as Rochelle Humes stands in

“Yeah, so we don’t know what’s causing this hepatitis yet,” Dr. Ellie explained.

“They think it might be a virus. Not one of the hepatitis viruses, maybe one of the more common viruses we have around. Not Covid, we don’t think,” she emphasised.

She then went on to say that having a dog in the UK is very common, which means it isn’t surprising that a lot of the children with hepatitis live with a dog in the house.

Possible link between dogs and hepatitis in children?

She then went on to say that it was just a signal that scientists had noticed.

“I don’t want people to be concerned about it, or to think about getting rid of the family pet at all,” she said.

“It’s just a signal that they’ve noticed,” she said again.

She then went on to once more emphasise that it’s very common for families to have a dog in the UK, hence the high ratio.

“I don’t think at this stage we need to worry,” she said. “It’s so uncertain.”

Despite Dr. Ellie’s assurances that the link was nothing to worry about, viewers were still furious.

Many took to Twitter to slam the show for “scaremongering” and trying to make people “panic”.

“So they don’t know what’s causing hepatitis in children but they’re going to blame dogs anyway & it’s all very well telling people not to get rid of their dogs but there’s always going to be idiots who’ll rush to do that without really checking the facts,” one viewer ranted.

“If its not proved, then why mention it, people will start to panic and the poor dog will suffer,” another said.

“#thismorning should be really ashamed of yourself. Scaremongering dogs cause illness in kids. #disgusting when there no evidence. People already taking dogs to shelters because of cost of living. They don’t need this. Really disappointed I even switched you off after that,” a third tweeted.

Another said: “Full on scaremongering segment [on] This Morning.”

This Morning airs weekdays from 10am on ITV and ITV Hub.