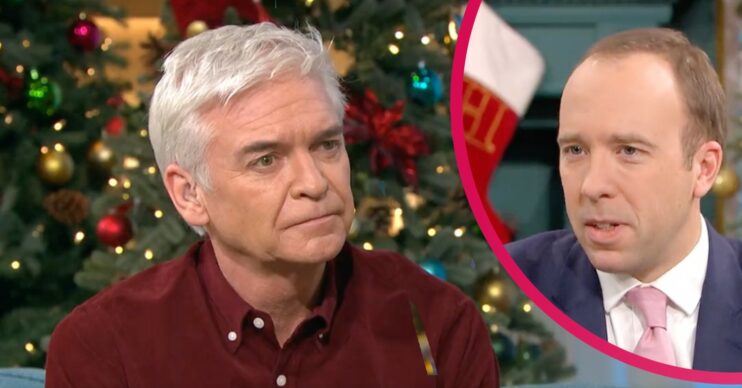 Some called it "insensitive"

Viewers of This Morning were left stunned today when host Phillip Schofield made a savage comment to former Health Secretary Matt Hancock.

Mr Hancock was on the show to talk about the possibility of screening all children for dyslexia, which he suffers from himself.

But TV watchers were taken aback when Phillip made a dig at Mr Hancock, asking him if it was his dyslexia that was to blame for breaking social distancing rules.

Read more: Holly Willoughby fans adore the sequin skirt she wore on This Morning today – but are shocked by the price

Why was Matt Hancock on This Morning today?

Phillip asked: “Was it your dyslexia that meant you misread the social distancing rules?”

A visibly shocked Mr Hancock replied: “No. I can’t blame that on dyslexia or anything else.”

He added: “That was a mistake and I’ve apologised for it.”

While some viewers praised Phil for the question, one even calling it ‘comedy gold’, others were less than impressed.

Many fans were disappointed at the serious segment being hijacked, branding Phil “insensitive” and taking to social media to complain.

“Disappointing that he went on to raise awareness about dyslexia, and it had to be bought back to what he did with a very insensitive question,” one person wrote on Twitter.

Another agreed, saying: “It’s not often I feel like defending Hancock, but this is a very patronising and damagingly uneducated question to ask.”

A third said: “A producer/editor needs to have a word with @Schofe on this one. Seriously insensitive and far from clever.”

And a fourth said: “A totally unnecessary comment! He was there to speak seriously about dyslexia!”

Disappointing that he went on to raise awareness about dyslexia, and it had to be bought back to what he did with a very insensitive question. 🤷🏻‍♀️ https://t.co/qgUtVFMtls

Not everyone was quite so forgiving of Mr Hancock though, with many viewers laughing at Phil’s “savage” questioning.

“Savage from Phil,” one fan tweeted, followed by a string of laughing emojis.

“Day made,” agreed another.

“It’s brutal,” remarked another, while lots of people pointed out that co-host Holly Willoughby struggled to hide a smirk.

Mr Hancock resigned as Health Secretary earlier this year as footage of him kissing aide Gina Coladangelo emerged in a tabloid.

Public fury followed as he was not only cheating on wife Martha, but blatantly breaking Covid-19 social distancing laws.

He said: “I accept I breached social distancing guidance in these circumstances. I have let people down and am very sorry.”

He pleaded for “privacy” and said it was a “personal matter”, adding: “I remain focused on working to get the country out of this pandemic and would be grateful for privacy for my family on this personal matter.”

What did you think of Phil’s questioning? Leave us a comment on this story on our Facebook page @EntertainmentDailyFix.