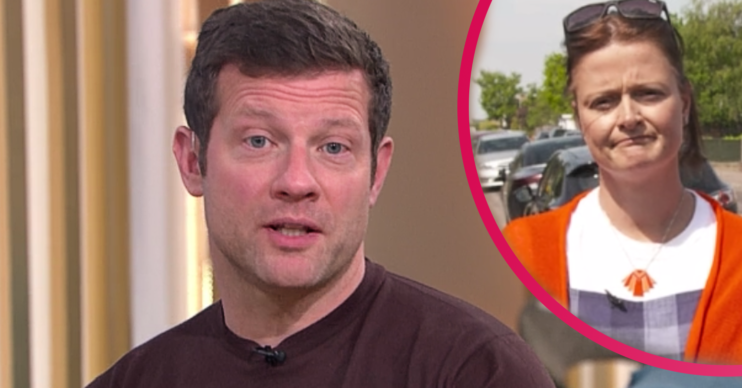 This Morning today: Dermot O’Leary criticised for ‘trying to cut off’ guest

The guest was making an appeal to recover a stolen motorhome

On This Morning today, host Dermot O’Leary appeared to cut off a grieving widow.

Dermot, 48, chatted to the woman about her late husband’s motor home, which had been tragically stolen.

But viewers were up in arms when Dermot swiftly moved on before his guest had finished talking.

Dermot and co-host Alison Hammond spoke to Bianca Lambert in Whistable, who explained that the family’s motor home had been stolen.

Sadly, her 35-year-old husband Tom had passed away from aggressive bowel cancer some months before.

Read more: This Morning: Josie Gibson falls into a lake live on air

But before he passed, they bought ‘Olive’ and made one last trip around the world.

And now, with the vehicle still full of Tom’s “trinkets” and travel memorabilia, the motor home was gone and Bianca made an appeal for its return.

How did Dermot cut her off?

After Bianca made the appeal, Dermot and Alison said that they would do all they could to help her and her two daughters.

However, aiming to fit in one last acknowledgement for the hospice that treated Tom, Dermot tried to cut her off.

Obviously pushed for time, he said, “thanks Bianca,” as she spoke.

Dermot trying to cut this woman off who’s praising a local charity; shut up and let her speak #ThisMorning

Viewers were not best pleased with Dermot’s interruption.

One said: “Dermot trying to cut this woman off who’s praising a local charity; shut up and let her speak.”

Another wrote: “Don’t try and cut her off Dermot #ThisMorning.”

A third fumed: “Dermot trying to cut her off towards the end, they really prioritise the weather over anything don’t they?”

“What scumbags,” one viewer wrote.

How are Dermot and Alison getting along?

Earlier this morning, the presenting duo appeared on Lorraine.

And during their interview, they said that it had taken them two months to get used to each other.

Read more: This Morning: Alison Hammond and Dermot O’Leary say it took months to ‘get comfortable’ with each other

And they admitted that there were elements of each other’s personality that they didn’t like.

“When you’re co-presenting, it takes a while to get those little nuances and the little beats,” Dermot said.