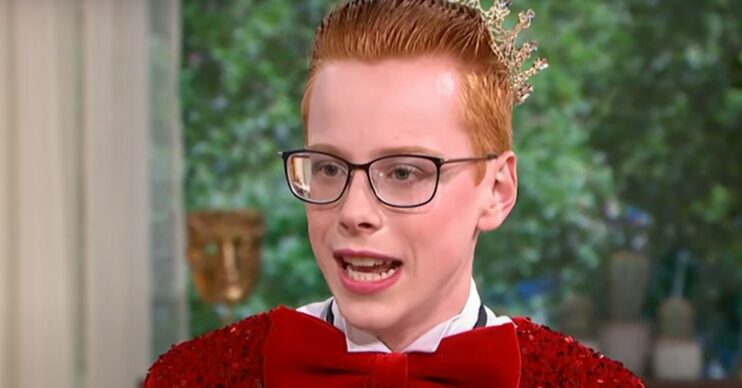 Korben and his mum chatted to Alison and Dermot

This Morning viewers rallied around a boy today (July 14) after cruel trolls targeted him on Twitter.

Teenager Korben appeared on the ITV show with his mum after he went viral for wearing a dress to his school prom.

He chatted to Alison Hammond and Dermot O’Leary with his mum about his reasons behind putting on the gown.

His supportive mum said that all his friends had been cheering him on.

“We were so excited about it because Korben didn’t tell anyone what he was wearing,” she told Alison and Dermot.

“I wanted to make it feel special for him and show who he really is so we got him the suit and the most amazing bit for me was the reaction from all his friends at school who all cheered and clapped and to feel that level of acceptance was incredible.

“I believe if you let your children be who they are you’ll get the best out of them.”

Korben added: “Yeah, I’m so blessed to have such supportive friends and family so to be accepted was amazing. To be an ordinary boy in a dress was amazing and shows you don’t have to be feminine or masculine.

“Find a supportive system of friends, teachers and family who support you and let you be yourself.”

Despite their positive outlook, some trolls took to Twitter and decided to insult Korben for his decision to wear a dress.

However, when the hashtag became overloaded with negative remarks, some viewers decided to hit back.

“There are some [bleep] comments on here about this lad. What’s he doing to hurt you? Get back to the 1950s you absolute morons #ThisMorning,” said one viewer.

A second said: “Let him be who he wants to be!”

“Well done Korben and his beautiful supportive mum. As she said… be kind and be nice and that’s all that’s important! #ThisMorning,” tweeted a third.

A fourth said: “The comments under #ThisMorning about a literal CHILD are disgusting. Leave him alone, he’s not bothering you or anyone else. Let him live his fabulous life! Don’t destroy his confidence just because you are insecure!”

The comments under #ThisMorning about a literal CHILD are disgusting.

“Some of the nasty comments about Korben! Wow! Get back to 1802! Actually, having said that, it was quite common in counties for men to wear make-up,” ranted a fifth.

A sixth hit back, saying: “For anyone that doesn’t think homophobia still exists just have a scroll through this hashtag #ThisMorning”.

“All of these negative comments on the #thismorning hashtag – grow up and let the boy be who he wants to be, at least he’ll be far happier than you will ever be,” ranted a seventh.