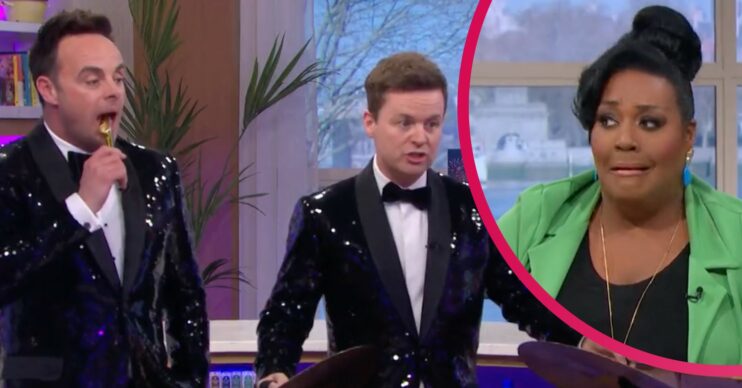 This Morning: Ant and Dec gatecrash show as Alison Hammond jumps out of seat

Ant and Dec left Alison Hammond jumping out of her seat on This Morning today after gatecrashing the set.

The Saturday Night Takeaway stars made an unexpected appearance during Friday’s (March 25) episode of the ITV daytime series.

And while viewers weren’t as taken aback as Alison, they were still delighted to see the four hosts in the same space.

What happened on This Morning today with Ant and Dec?

Alison was speaking about Monday’s upcoming show when Ant and Dec burst into the studio.

Ant looked to have a kazoo and was banging any solid item in his vicinity with a huge pole.

And Dec was making as much commotion as possible too, smashing cymbals together.

The lights changed and confetti fell from above as the Geordie duo marched about.

A bemused Alison – who had leapt to her feet and cowered with her co-host – and Dermot were quick to ask what was going on.

Ant explained they’d had a weird dream Saturday Night Takeaway was back on the box after a night off last weekend… and their dream is coming true!

Dec added they were on their way elsewhere to film a skit for tomorrow evening’s show.

But they’d taken the opportunity to remind Alison, Dermot and This Morning viewers that SNT was returning after being displaced by the rugby last Saturday.

As Dec added that Anna Maxwell Martin and Michael Buble would be on their show, Dermot could be seen picking confetti out of his drink.

He joked: “This is how you feel when Stephen Mulhern invades your show!”

Before departing, Ant helped himself to an apple from the fruit display in front of Dermot and Alison. But he soon learned, after a bite, that the fruit was just for show.

“I knew they weren’t real!” Ant exclaimed, hurling the apple to the ground.

And as the Ant and Dec procession departed the way they came, Alison surveyed the chaos and remarked: “I didn’t expect that.

Several viewers demonstrated how happy they were to see Ant and Dec by saying so on social media.

“Funniest thing I have seen on TV,” one fan wrote on Twitter.

Another chuckled: “Oh my gosh they’re cheeky chappies. They do make me laugh.”

“Keep the laughter going, we all need it!” pleaded a third person.

And somebody else tweeted: “Hilarious when Alison screamed.”

This Morning airs on ITV, weekdays, from 10am. Ant and Dec’s Saturday Night Takeaway is next on ITV tomorrow, Saturday March 26, at 7pm.