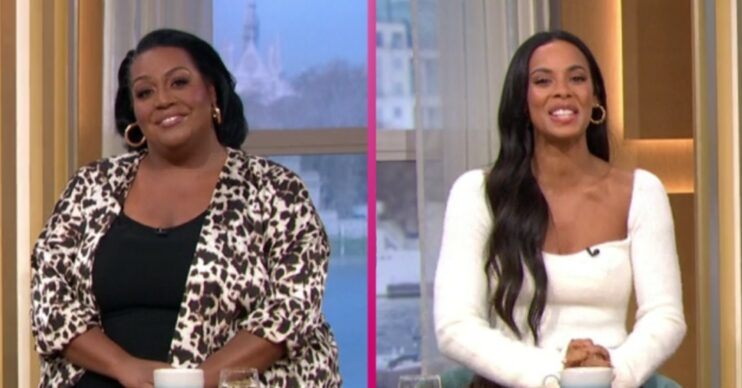 Alison stepped in at the last minute today

This Morning saw a dramatic late shake-up happen today as Phillip Schofield was forced into isolation with Covid-19.

Alison Hammond filled the breach left by Phillip and co-hosted the show alongside Rochelle Humes today. Viewers, as expected, were divided.

News broke last night (Monday, January 31) that Phillip had tested positive for Covid-19, meaning he wouldn’t be able to host today’s edition of This Morning.

The 59-year-old announced the news on his Instagram story last night. He posted a picture of a positive lateral flow test.

ITV later announced that Alison would be stepping in to host the show in Phillip’s absence. With Holly Willoughby absent too, it fell to Alison and Rochelle to entertain viewers on today’s show.

“I didn’t expect this,” Alison said at the start of the show. “What’s going on?”

“Well, it was a nice surprise,” Rochelle said of Alison joining her. “Obviously it’s a little bit unfortunate – and poor Phil!”

Alison and Rochelle were then joined by Phillip, who video-called into the show from his house in London.

“How are you doing?” Rochelle asked. “Have you still just a sore throat, are you feeling any worse?”

Phillip, Alison, and Rochelle continued to joke about Phillip’s positive test, and the 59-year-old revealed he had a “slight temperature”.

“This is not what I expected, I’ve got to say,” he confessed. He then admitted that he and ITV were a little worried about Sunday’s Dancing On Ice. Phillip may not be able to host the show, depending on whether or not he tests negative two days in a row by Sunday.

However, it wasn’t just Phillip’s positive test that got viewers talking, it was his replacement Alison and her co-host Rochelle!

What did viewers say about the hosts of today’s This Morning?

Viewers have been divided over having Rochelle on the show as it is, but how did they react to having Alison joining her?

Some viewers really enjoyed having Alison and Rochelle on the show, calling their pairing “refreshing”.

“I don’t like to wish ill on anybody at all and I hope Phillip Schofield makes a speedy recovery. However it was very refreshing to see Rochelle and Alison present #ThisMorning,” one viewer said.

“Have to say Rochelle and Alison together have been great today,” another said.

However, not everyone was in agreement. Many were unhappy with the pairing, with some even wondering why Josie Gibson didn’t get called up to co-host the show instead.

“Oh sweet [bleep], Rochelle AND Alison? Why do they hate us so much,” one viewer moaned.

“Rochelle and Alison are seriously crap presenters,” another said.

“Where’s Josie? She should have been on with Alison! Rochelle is so wooden,” a third tweeted.

“Until Philip and Holly are back I for one won’t be watching. Rochelle and Alison should stick to kid’s TV,” another wrote.

This Morning returns tomorrow (Wednesday, February 2) at 10am on ITV and ITV Hub.