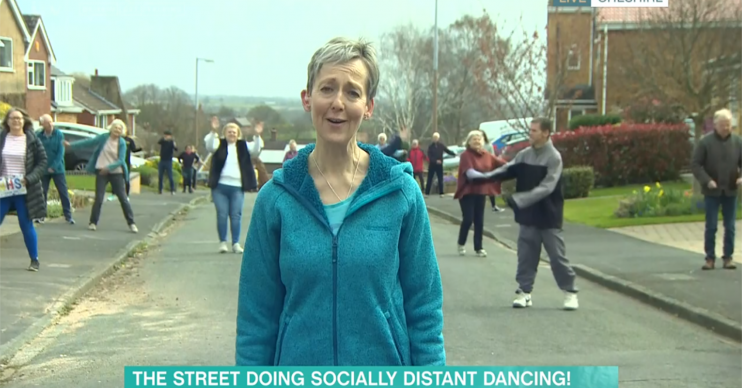 The street went viral after sharing a video of them dancing

Viewers of This Morning have fumed over street residents not social distancing amid the coronavirus lockdown.

Hosts Eamonn Holmes and Ruth Langsford spoke to street residents on Friday’s show (April 3) about their decision to dance in their Cheshire street at 11am every day.

Read more: Josie Gibson breaks down on This Morning as she struggles in self-isolation with son

Fitness instructor Janet, who set it all up, said: “It’s been brilliant. Everybody’s come out, just got involved and having fun.

“Moving, getting to know one another. It’s been good.”

She continued: “I got them out by putting a slip through everybody’s door.

“Initially it wasn’t about dancing, it was just about people coming out standing on the doorstep and having a minute silence to think about the people really struggling at the moment.

“A minute’s clapping for all our key workers working hard and keeping us safe.

Every day at 11am, one street in Cheshire meets outside for a socially-distanced boogie to blow their lockdown blues away!

And today, they had company… 🕺💃 pic.twitter.com/WTJKPLAhei

“It just evolved from there. People wanted to do it again and again and I think we’re on day 10 now.”

Janet insisted: “People tend to be stood at their drives so we are very well spaced.

We can talk to each other, laugh with each other but we are keeping apart.

“We can talk to each other, laugh with each other but we are keeping apart.”

However, viewers thought they were still too close to each other and shared their thoughts on Twitter.

Another wrote: “That dancing street is setting a really bad example to people. Not social distancing at all! The message is #StayHome!!!”

A third added: “#ThisMorning being completely irresponsible with its street dance. Stay at home unless essential, exercise alone or with a member of your family ONLY.

“Does not say have a street party whilst exercising. Time to start taking this seriously.”

@thismorning
That dancing street is setting a really bad example to people. Not social distancing at all! The message is #StayHome !!! #ThisMorning #SocialDistancing

So what’s the difference between street dancing and socially distancing with you friends in the park!! Surely this goes against the rules of Stay at Home! #ThisMorning ?!

#ThisMorning I get what she is trying to do keep everybody's spirits up.but that does not look like social distancing to me.

Read more: Doctor issues plea to Brits to stay indoors as temperatures expected to soar to 20C this weekend

However, others defended the street and praised them for keeping spirits up.

At the end of the segment, Ruth and Eamonn joined the street as they danced in the studio.

Did you think they were distanced enough? Visit our Facebook Page @EntertainmentDailyFix and let us know what you think of this story.