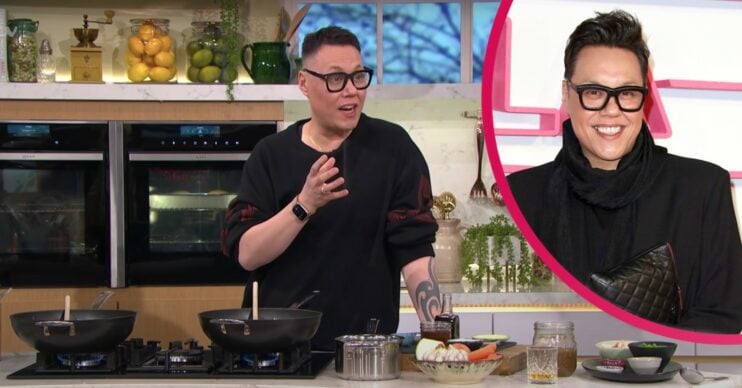 Gok Wan is the nation’s favourite fashionista who often appears on This Morning, offering fashion advice and cooking up mouth-watering recipes.

The fashion icon has even received a well-deserved MBE for his services to fashion and social awareness.

But who is the famous fashion consultant and why was he hospitalised in 2019?

How did Gok Wan become famous?

Gok Wan, also known as Kowkhyn Wan, is a famous fashion guru who joined the This Morning team in 2012.

But as well as his great taste in fashion, Gok also has a taste for food.

Read more: This Morning viewers ‘utterly disgusted’ by sex slot: ‘This is ridiculous!’

Gok has an impressive talent for cooking from working in his family’s Chinese restaurant.

In 2012 he even presented his own series called Gok Cooks Chinese.

Since then, Gok has also been making appearances on This Morning as a guest chef where he introduces people to his delicious Chinese recipes.

The star even admitted exclusively to ED! that his role on This Morning “saved him” from his “biggest fear” during the first lockdown.

The happiest of birthdays to this absolute beaut. Love you heaps. Can’t wait to see you later. ❤️ pic.twitter.com/SW1OJlowHN

No, Gok is currently thought to be single, but he hasn’t ruled out marriage in the future.

He previously said: “I do intend to be married at some point in my life because I want the wedding.

“But whether I end up marrying one of my girlfriends – just to have the day – or whether it’s a love marriage, I have no idea,” he told The Sun in 2017.

The pair were rumoured to be dating for three years until they split in 2019.

The previous year David shared a birthday tribute to Gok and they looked inseparable.

Posting a selfie of the pair, he said: “The happiest of birthdays to this absolute beaut. Love you heaps. Can’t wait to see you later.”

However, sadly it seemed like it wasn’t to be.

Over the years, Gok has never been afraid to open up about his battle with mental health.

In 2017, Gok reflected on the darker times of his youth as he talked about his struggles with anxiety and OCD for World Mental Health Day.

He told the Loose Women: “I like to have my own space.

“I’ve always been a real big high achiever and I’ve always thought I can do anything so I’m constantly trying to do better which has created this obsessiveness as I always feel like I could’ve done better.

“I always want perfection!” he said.

Gok has also previously admitted having obesity and anorexia growing up, while speaking on This Morning.

He shocked viewers when he admitted: “I started dieting and lost 11 stone in eight months. I had a very severe eating disorder.”

In a candid post on Instagram he also admitted that he wanted to “die” at one stage because he felt “ugly, fat and not good enough”.

Back in 2019, the fashionista shocked his followers on Instagram after posting a photo of himself with a nasty bruise on his face.

He captioned it: “Post scooter mishap – bruise on my chin is coming out to play… I actually really like the colour and I’m considering getting my office painted this colour #silverlinings.”

It turns out Gok Wan was hospitalised after falling off his scooter and fracturing his arm.

After spending time in the hospital, Gok made a speedy recovery.

He even thanked the NHS for being “kind, considerate, quick and reassuring”.

Catch Gok Wan on This Morning weekdays from 10am on ITV.