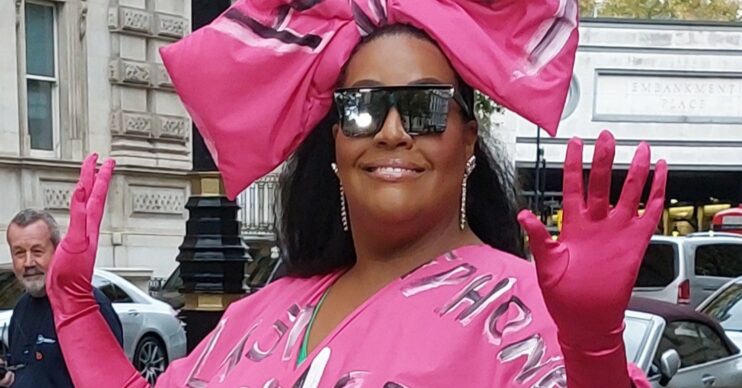 The ITV star could split her time between the studio and Number 10!

This Morning host Alison Hammond has teased that she’s preparing to apply for a new job.

The star has been kept busy lately presenting the ITV show with Dermot O’Leary.

However, Alison has playfully confessed she might have the time for another role too.

The ITV star took to Twitter to reveal that she plans on sending a cheeky job application to the government.

With Holly Willoughby and Phillip Schofield filling in on today’s This Morning (December 10), Alison decided to spend her day mulling over her next career move.

It turns out we could soon be seeing Alison doing the next briefing from Number 10 – well that’s what we’d like to see!

So I’ve thought long and hard about this , I’ve decided to apply for Prime Minister ! I feel I would do a grand Job . Thoughts ??? 😂😂

She tweeted: “So I’ve thought long and hard about this, I’ve decided to apply for Prime Minister! I feel I would do a grand job. Thoughts?” followed by laughing face emojis.

Fans rushed to the comments to share their joy over her decision and poke fun at her jokey tweet.

This Morning viewers in fits over Alison Hammond’s tweet

One fan replied: “Definitely and have Josie Gibson as deputy.”

“I have said this all along! Alison Hammond, you’re a legend! #AlisonForPm get the hashtag trending!” said a second amused fan.

A third tweeted: “Right behind you Madam Prime Minister.”

Read more: Alison Hammond warned she could “die” during icy swimming challenge on This Morning

Meanwhile, a fourth added: “Go on Alison rule the world I’m sure it fun laughter and glitzy.”

Prime Minister Boris Johnson has become a controversial figure this week in the UK following reports the government held a Christmas Party during lockdown.

London was locked in Tier 3 rules when the alleged party took place, and the reports have left the country up in arms.

Boris Johnson announced on Wednesday that an internal investigation would look into reports.

The controversy first arose after a leaked video emerged showing Downing Street aides laughing about a “fictional” party at No 10 in December 2020.