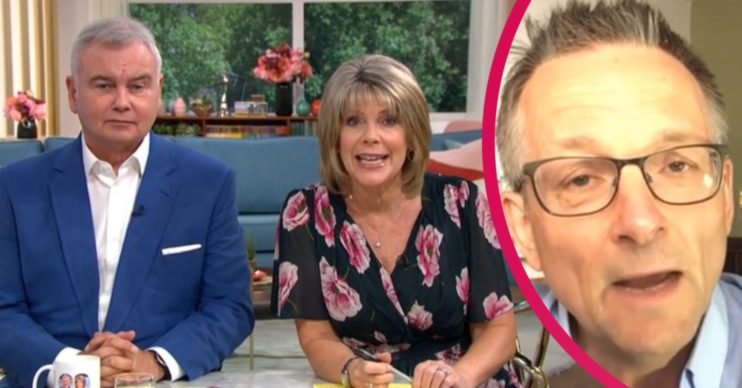 It will feature on a Channel 4 programme

This Morning featured a chat about an extreme diet and viewers were fuming, branding the segment ‘dangerous’ and ‘irresponsible’

Michael, whose diet will be part of new Channel 4 show Lose A Stone in 21 Days, has created a plan he says can help people lose just that – a staggering one stone in just three weeks.

What did This Morning viewers think of the diet?

But those watching at home said they were “disgusted” with the interview, calling the dietary advice  – centred eating healthy foods but maintaining an extreme calorie deficit – “unsafe” and not sustainable for a health lifestyle.

One said: “There are so many healthy ways to loose weight, @thismorning promoting an 800 calorie diet on TV is so wrong and can cause so many issues #Thismorning.”

The diet he is promoting is unsafe.

Another said: “What doctor in the right mind would recommend 800 calories a day? Unsustainable for a lifetime healthy diet #thismorning #faddiet.”

A third wrote: “Is anyone else a bit disgusted that an established daytime TV show are promoting an 800 calorie diet? So, so bad for you. ITV, sort it out. #ThisMorning.”

Someone else raged: “#ThisMorning how is this guy a doctor? The diet he is promoting is unsafe and unsustainable.”

A fifth said: “800 calories a day is dangerously low, he is just promoting his own fad diet! Calorie [bleeping] deficit and throw in some exercise #ThisMorning.”

“Talking about a 800 calorie diet on #ThisMorning?!” fumed another. “That’s not a diet. That’s a temporary eating disorder. Making me so angry. I’ve suffered for years and had people try to help fix my mental disorder, yet now this [bleep] is being promoted?? #itv.”

Is anyone else a bit disgusted that an established daytime TV show are promoting an 800 calorie diet? So, so bad for you. ITV, sort it out. #ThisMorning

This sounds irresponsible and unhealthy!! I’m only petite but need way more than 800 calories. Extreme dieting can’t be good for anyone. Surely a gradual approach combined with exercise is far healthier.
Plus he keeps plugging his wife and his own diets.#thismorning

Help from an experienced GP

However, some pointed out that the diet wasn’t supposed to be for a lifetime – just three weeks – and that it could teach people to make healthier choices over the food they eat.

One argued: “It’s not for a lifetime. It’s for three weeks. It teaches your body to utilise healthy food so that when you start adding foods back in you are more likely to make the right choices.”

As he spoke about the diet, Michael emphasised the importance of drinking plenty of water and eating lots of vegetables to take in key nutrients – many of which the participants of the Channel 4 show were actually deficient in, before starting the diet.

He also explained: “The person who’s helping me run this study is my wife Dr Clare Bailey. She’s been a GP for more than 30 years. She’s helped a lot of people lose weight in that time.”

A Channel 4 rep told ED! in a statement: “Dr Michael Mosley is an independent and award-winning science journalist, who along with Dr Clare Bailey is globally renowned for achieving healthy, long-term results with restricted calorie diets.

“Research has found a short-term 800-1000 calorie diet has the potential to reverse a range of health problems including Type-2 Diabetes.

“This diet is inspired by a recent Oxford University study and all episodes clearly state it’s only suitable for people whose BMI puts them in the overweight or obese categories and that it should be done with proper medical supervision.”

What did you think of the interview? Leave us a comment on our Facebook page @EntertainmentDailyFix and let us know.