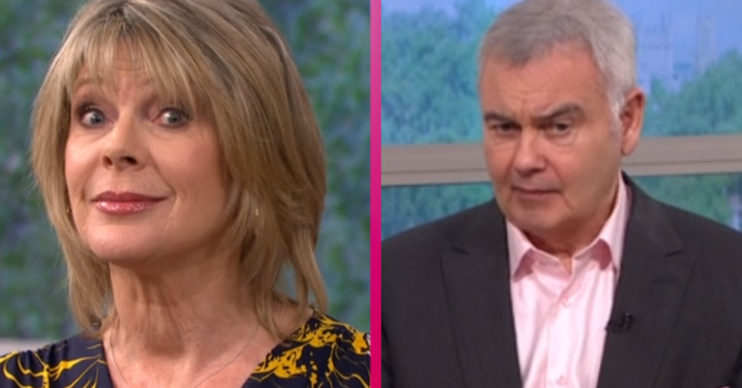 This Morning: Ruth Langsford told off by Eamonn Holmes as she ‘messes up’ Spin To Win

This Morning host Eamonn Holmes gave his wife Ruth Langsford a telling off after she made a mishap during Spin To Win today.

The pair hosted Friday’s edition of the programme (September 11) and viewers had the opportunity to win some cash or a holiday.

One caller, Nicky from Blackpool, bagged £250 and a holiday in the UK after Ruth spun the wheel.

Read more: This Morning: Phillip Schofield convinced couple were having sex during Spin To win

Nicky then had the chance to win the bag of goodies.

However, Ruth messed up as she told off chef Ainsley Harriott for laughing and said his name, when the question was which chef was on the show today.

As Ainsley giggled away, Eamonn went up to Ruth and whispered in her ear.

He told her: “You weren’t supposed to say that.”

Ruth replied: “He was laughing!”

Ruth has already given you the answer anyway.

Eamonn said: “Ruth has already given you the answer too.”

What happened on yesterday’s This Morning?

Meanwhile, on Thursday’s show, host Phillip Schofield accused a caller of having sex.

After the caller, Matthew, took ages to pick up, Phil demanded to know why it took so long for him to answer the phone and asked what he was doing.

Phil then said: “Is your wife close by?” to which Matthew said yes.

Phil exclaimed: “We’ve just caught them at it!”

However, Holly Willoughby said: “No we didn’t Phillip!”

Moving swiftly on to the wheel, Matthew won £250 and a UK holiday.

Phillip signed off: “Enjoy your morning… and crack on!”