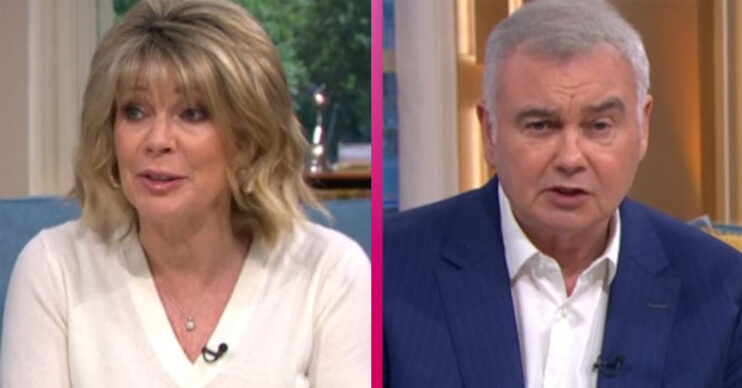 This Morning: Ruth Langsford calls out Eamonn Holmes for blurting out ‘private message’ on air

This Morning host Ruth Langsford called out her husband Eamonn Holmes today after he exposed a “private message” she had written.

Eamonn, 61, read out the secret scribbling she had shown him during a viewer phone-in with agony aunt Deidre Sanders.

The troubled fan of the ITV show had contacted them seeking advice after admitting that her husband wasn’t doing enough to help care for their child.

They explained that life was extra demanding because their little one has autism.

As the details of the caller’s predicament unravelled, Ruth scribbled out a note.

Read more: OPINION: ‘ITV needs to wake up and make Eamonn and Ruth main anchors on This Morning’

Meanwhile, Deidre suggested: “Maybe your partner just struggles with the autism and he needs more support so he understands how he can better cope with that.”

Eamonn then added his viewpoint.

He said: “Well explained Deidre. Tough situation Lucy and we hope it improves for you. Thanks for sharing with us today.

“Ruth summed that one up, she wrote two words here…”

What did Ruth Langsford say on This Morning today?

Ruth quickly interjected, firing her husband a warning to keep his mouth shut: “Don’t say what I wrote!”

However, Eamonn ignored her pleas as he cheekily told viewers: “The first one was lazy and I can”t tell you the second one.”

A bewildered Ruth snapped at her husband to reprimand him: “Eamonn!”

He then tried to justify his actions quipping: “I’m just saying, that makes you angry.”

Ruth then explained what she had written down in more detail as she hurried to get her side across.

She said: “That was a private message. It makes me boil. How can you sit there and let that woman especially with a child with needs and as Deirdre said, challenging behaviours, and think you can sit on your phone.”

Eamonn tried to put across an alternative viewpoint as he explained that things aren’t always as clear cut as they seem.

He shared: “Everybody has issues and there may be different ways of looking at it.”