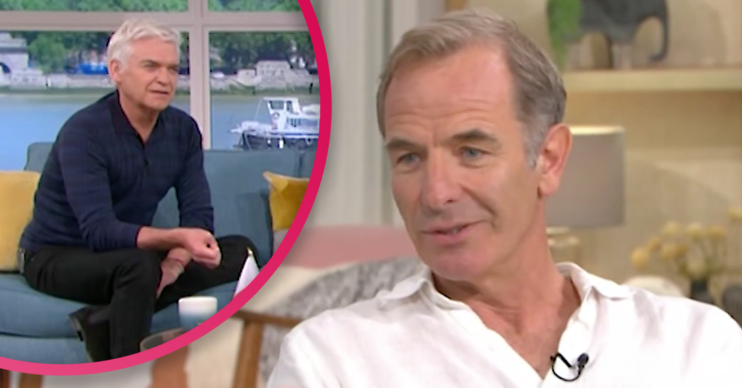 This Morning: Robson Green sparks confusion as he appears on show today

'What's happened to his Geordie accent?'

Robson Green appeared on This Morning today (July 8), but his appearance sparked confusion among some fans.

However, fish were the furthest thing from the minds of some viewers as Robson chatted to hosts Holly Willoughby and Phillip Schofield.

What happened with Robson Green on This Morning today?

Some viewers picked up on Robson’s apparent lack of Geordie accent as the interview began.

One commented: “Robson suffering from some kind of accent syndrome.”

Another asked: “Since when has Robson Green been posh?”

“Why did I think Robson Green was a Geordie?” asked another. “He’s a proper posho.”

“I’m old enough to remember when Robson Green had a Geordie accent,” another viewer quipped.

“Dear God what happened to Robson Green’s Geordie accent?” asked another. “He’s gone rouge and has a posh accent.

They also urged the star: “Be proud of your broad Geordie accent. Why do these people change for fame?”

Since when as Robson Green been posh? #ThisMorning

Later in the interview, when talking about his home town, some viewers picked up on the fact that his accent had got a little more Geordie.

“Robson returns to his own accent,” said one This Morning fan. “Weird.”

However, not everyone was so obsessed with how the actor sounded.

One fan was left swooning, flooding their tweet with love heart eye emojis.

“Robson Green gets better with age,” they declared.

So where is Robson Green from?

Actor and singer Robson Green was born in Hexham, Northumberland, in 1964.

He grew up in Dudley, North Tyneside.

After leaving school he worked at a shipyard before pursuing acting.

He found fame on ITV’s Soldier Soldier in 1995.

So what did you think of Robson’s appearance on This Morning today? Tell us on our Facebook page @EntertainmentDailyFix.