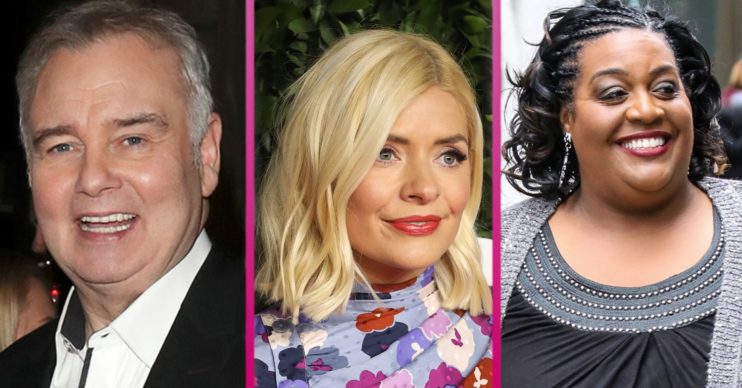 How much do Phillip Schofield and Holly Willoughby earn at This Morning and what is their net worth?

This Morning presenters earn some of the highest salaries in television – what are Phillip Schofield and Holly Willoughby’s net worth?

The show is consistently one of the most-watched daytime television shows on British telly.

As a result, its hosts are paid a small fortune year in and year out for their presenting duties.

But just how much are they paid exactly? Are they all multi-millionaires by now?

How much does Holly Willoughby earn?

Holly Willoughby is believed to be one of the highest paid This Morning presenters.

This comes after it was revealed she previously earned £200,000 less than her co-host Phillip Schofield.

But it has been widely reported to have been rectified so that they both earn the same staggering amount.

In addition to her This Morning duties she also hosts various other shows – including Dancing on Ice.

And she has her own company, Roxy Media Limited, which last year raked in around £30,000 a week!

What is Phillip Schofield’s This Morning salary?

Phillip Schofield is said to earn around £750,000 a year from his contract with This Morning, following a bumper pay rise after the show was extended by 30 minutes.

Like Holly, he has many other ventures. He co-hosts Dancing on Ice with Holly and also fronts The Cube.

What’s more, he released his bestselling book last year and pocketed £1.45million for it. He also promotes a posh version of boxed wines, a gin subscription and We Buy Any Car.

According to Celebrity Net Worth, Phillip is worth around £8.6million in monetary terms.

How much is Alison Hammond worth?

Alison Hammond is the rising star of This Morning. She used to be their lead showbiz reporter and had many a hilarious encounter with A- List stars. She also regularly hosted This Morning competitions.

Her latest This Morning salary remains unknown to the general public.

But according to IdolNetWorth, she is worth an estimated £930,000.

While speaking to Metro she said that while she was struggling in her 20s to make ends meet, seeing a zero bank balance made her feel ‘happy’.

She explained: “Those were like the happiest days, when I used to see zero I used to think “oh thank god!” I used to live in an overdraft, I think it was like £1000 overdraft I used to have and I think I used to need to go into it every single month.”

How much does Dermot O’Leary get paid?

As with Alison his This Morning salary isn’t known yet. But as he’s been hosting for years now he’s said to be worth millions.

In fact, according to CelebrityNetWorth, he’s worth a whopping £8.6 million!

What about Ruth Langsford and Eamonn Holmes?

Eamonn and Ruth no longer host This Morning on a regular basis.

Instead, they fill in slots when the regular hosts are away on holiday or unwell.

It is not known how much they are now paid for their This Morning guest presenting slots.

But Ruth and Eamonn are estimated to be worth £3.6 million each.

*All net worths and salaries are estimates.

What do you think of Phillip Schofield and his net worth? Let us know on our Facebook page @EntertainmentDailyFix.