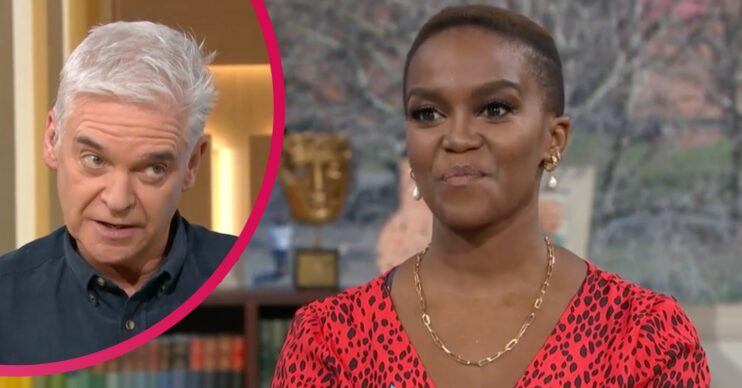 Oti is staying tight-lipped about her Strictly future

This Morning host Phillip Schofield took the opportunity to grill Oti Mabuse on whether she was quitting Strictly during her appearance on the show today.

The South African dancer recently made her debut as a judge on Dancing On Ice and is set to front a new ITV show later this year, leading to speculation that she’s quitting Strictly.

Oti followed on from her The One Show appearance last night (Monday, January 17) by sitting down with Phillip and Rochelle Humes on This Morning today.

During Oti’s chat with the pair about Dancing On Ice, Phillip addressed the elephant in the room – Oti’s future on Strictly.

“Going back to Strictly…” Phillip said before Oti interrupted him.

“Oh, Phil, Phil, no, you’re getting excited already,” she groaned.

“No, no, I mean the thing is, I’ve just looked at your schedule, and I don’t see, personally, how you’re going to fit it in,” he said.

“I will fit everything in,” Oti said, albeit very unconvincingly. “I have a great agent who plans everything really well.”

What did Oti Mabuse say next?

Phillip then went through Oti’s schedule, casting further doubt on her future as a dancer on Strictly Come Dancing.

“So, in April, you start your tour,” he said. The 31-year-old’s new tour will be about how she went from living in South Africa to becoming the “Oti that I am today”.

“So, you’ve got that, then you’ve got the podcast,” Phillip said. Oti’s Dancing Legends is a new Radio 4 podcast for BBC Sounds, which began on January 12, with weekly episodes.

“And then you’re the host of a new ITV series, Romeo & Duet,” Phillip continued. “I can’t see how Strictly fits into this.”

“Are you going back to Strictly?” Phillip asked. “Don’t know yet,” Oti said with a big smile.

“No, there will be an announcement made officially by Strictly,” she said.

Rochelle then said that looking at Oti’s schedule, if anybody can fit Strictly in, it’s Oti.

Plenty of viewers took to Twitter after Oti’s appearance on This Morning to talk about what she had to say about Strictly.

“Aw I hope Oti doesn’t leave Strictly, she’s one of my favourites,” one viewer tweeted.

“So basically Oti is leaving Strictly,” another said. “Oti milking it again while she can,” a third grumbled.

Some viewers weren’t happy that Oti was appearing on the show in the first place, let alone that she might be leaving Strictly.

“There’s some Oti overkill coming up,” one tweeted.

Others were loving Oti’s appearance on the show, though!

“Oti is so beautiful,” one fan wrote. “She’s always so happy & positive.”

Do you think Oti will be on the next series of Strictly? Leave us a comment on our Facebook page @EntertainmentDailyFix and let us know.