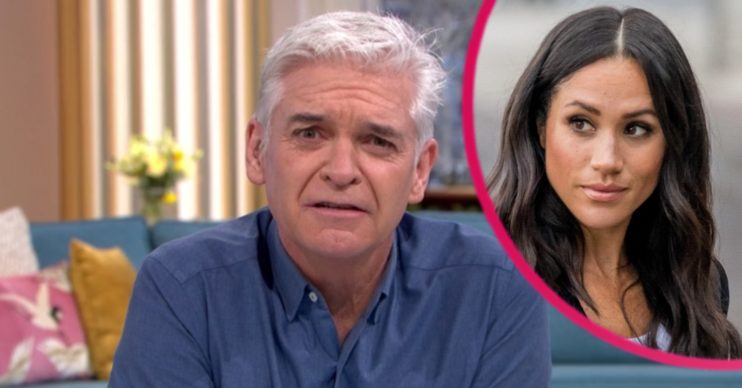 He previously told Meghan and Harry to ‘shut up’

This Morning star Phillip Schofield has been accused by viewers of making “digs” at Meghan Markle.

As the group discussed Donald Trump’s recent comments about the Duchess of Sussex, the presenter appeared to make a sarcastic remark.

This Morning: What did Phillip Schofield say?

It came after Donald admitted he would like to see Meghan run for president in 2024.

Sharing her thoughts, Camilla pointed out that it was unlikely as the Duchess is currently pregnant.

Flashing a smile, Phillip, 58, then replied: “But also, doesn’t she want a quiet, private life?”

“I would suggest if she thinks the British press have been intrusive while she has been a royal, if she were to be a candidate, my goodness, a great deal would be unleashed on her.

“So she would have to think very carefully about it.”

However, the sarcastic comment didn’t go unnoticed with viewers.

Taking to Twitter, one wrote: “@Schofe needs to stop his sly sarcastic comments about Meghan Markle – does it every day. We don’t need a daily negative commentary on Meghan #thismorning.”

Phillip Schofield has been really disappointing through this entire thing

A second shared: “Phillip Schofield has been really disappointing through this entire thing. Always making sly digs over Meghan for no solidly good reason.”

In addition, a third added: “How about @Schofe & @hollywills (especially Philip) watch the interview of what Meghan was talking about privacy. Honestly who does Philip think he is?”

@Schofe needs to stop his sly sarcastic comments about Meghan markle does it every day. We dont need a daily negative commentry on Meghan. #thismorning

Phillip & Holly, you've kept me going during the current pandemic, I've watched every day since March 2020. However, I need to say that Phillip you have no right to target Harry & Meghan with your hostile comments, especially as you are suppose to be impartial!

A fourth complained: “Phillip & Holly, you’ve kept me going during the current pandemic, I’ve watched every day since March 2020. However, I need to say that Phillip you have no right to target Harry & Meghan with your hostile comments, especially as you are suppose to be impartial!”

Phillip calls for Meghan and Harry to ‘shut up’

However, earlier this week, viewers agreed with Phil’s comments about Meghan.

The host had told the couple to “shut up and get on with your quiet American life” on Wednesday’s show.

His remark came during a chat with Gyles Brandreth and Beverley Turner.

Earlier this week, Phil said: “There’s been an enormous amount of sympathy over the race issue and the mental health issue… but looking at the polls that sympathy seems to be ebbing away.”

Furthermore, he added: “Isn’t there this feeling Gyles, that you’ve made your point, essentially shut up now and get on with your quiet American life.

“You’ve stabbed a knife through the heart of the monarchy… but stop now.”

At the time, some viewers agreed with Phillip’s point.

“I like Harry & Meghan, but they shouldn’t be letting ‘friends’ speak for them. Sick of hearing it now,” once viewer revealed.

“Yes Phil spot on about Meghan,” said another.