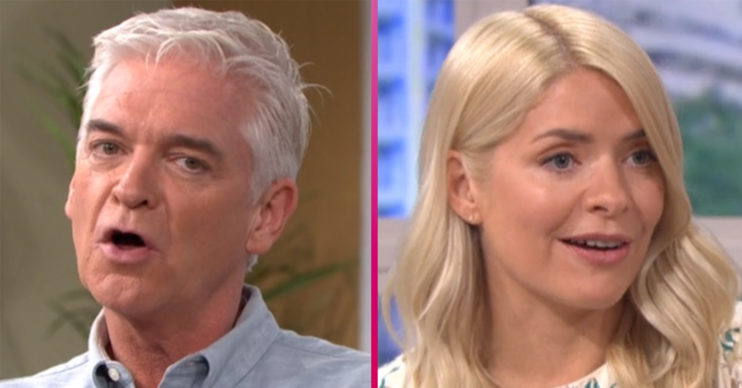 This Morning: Phillip Schofield calls out bosses after awkward Eamonn and Ruth blunder

This Morning host Phillip Schofield called out bosses after they made a hilarious blunder.

The presenter noticed the programme‘s titles were incorrect as the show returned from an advert break.

Read more: This Morning: Ruth Langsford told off by Eamonn Holmes as she ‘messes up’ Spin To Win

Husband and wife duo Eamonn Holmes and Ruth Langsford usually host the programme on a Friday.

As the programme returned, Phil exclaimed: “Eamonn and Ruth?!”

Holly Willoughby asked: “Did that say Eamonn and Ruth?”

Phil continued: “Anyway, it is us.”

Meanwhile, last week on the show, Phil was left convinced they had interrupted a couple having sex during Spin To Win.

The pair called Matthew from Newcastle and it took him a while to pick up.

When he eventually answered, Phil demanded to know why it took so long for him to answer the phone and asked what he was doing.

Phil then asked Matthew who he was in lockdown with, to which the viewer replied: “My wife.”

Phil probed: “Is your wife close by?”

When he answered yes, Phil was certain that he knew what he meant.

He shouted: “We’ve just caught them at it!” to which Holly said: “No we didn’t!”

Moving swiftly on to the wheel, Matthew won £250 and a UK holiday.

Read more: This Morning: Phillip Schofield convinced couple were having sex during Spin To Win

Phil told him: “Enjoy your morning… and crack on!”

Earlier in the show, chef Gino D’Acampo gave viewers an eyeful as he flashed his bare bum to the cameras as he made his return.

A shocked Holly told him: “Somebody get an anti-bac wipe immediately for my eyeballs! Gino behave yourself!”