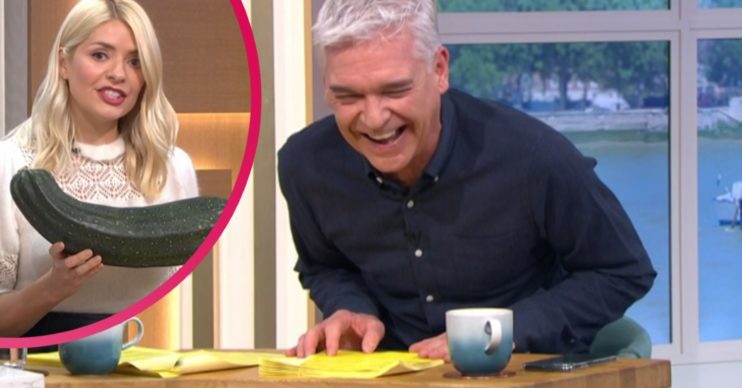 This Morning: Phillip Schofield shocks the studio with X-rated warning to viewers

Holly Willoughby had her co-star Phillip Schofield in tears when she pulled out a gigantic marrow from underneath the desk on This Morning.

The presenting duo were chatting with a pair of brothers who had broken the world record for growing the biggest pumpkin ever.

The sizeable vegetable had Phil and Holly in awe, and left viewers at home baffled too.

Read more: Take part in our reader survey and you could win a £250 Amazon voucher

But Holly couldn’t help but compete when she brought out a giant marrow, that she said originally was supposed to be a courgette.

“Is there a website called bigmarrow.com?” questioned Holly. “It’s quite on the large side, but in order to progress this to the size of your pumpkin you’re saying it’s just water and love?”

As the interview came to an end, Phil quietly warned viewers: “If I were you, I’d be careful before you google bigmarrow.com!”

The studio then erupted into laughter, and viewers rushed to Twitter to poke fun at the segment.

1. Of course they got Holly to hold it.
2. Of course Phil found it funny.
🍆😳😂 #ThisMorning pic.twitter.com/QXb9bt7fSB

Just tuned in and I saw holly holding a big marrow , I dont want to know #thismorning

Why did Holly Willoughby spark debate on This Morning this week?

Taking to Instagram ahead of going live at 10am, Holly revealed what she was wearing and it quickly divided viewers.

She said: “Morning Tuesday… Once again we are doing dress rental in our fashion item today… this green dream is also only mine for a while… if it’s good enough for Cinderella!”

“This is gorgeous! Although it’s definitely not green,” said one.

“I thought this! It’s teal surely? Beautiful though,” said another.

Read more: Cerys Matthews ‘had a good time’ on I’m A Celeb despite controversial romance

“It is dark teal,” another stated.

“That’s blue – unless I have lost my colour vision overnight?” another commented.

However, we can in fact confirm that the dress is in fact a shade called deep teal.

And, according to Wikipedia, teal is a “blue-green colour”.

So that means everyone was correct! Hooray!