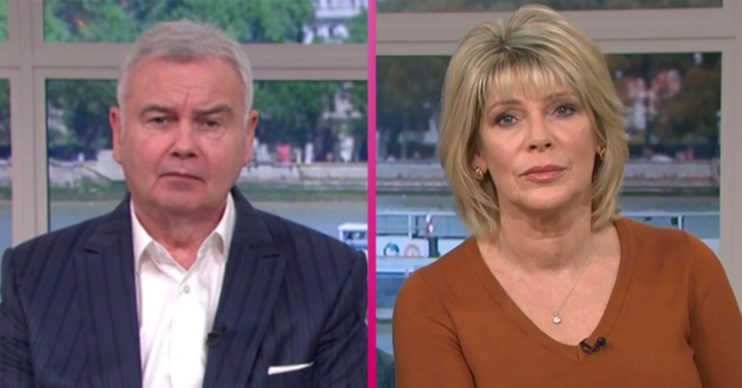 This Morning viewers were left fuming as Eamonn Holmes and Ruth Langsford were replaced as hosts during today’s Christmas panto.

The married pair, who are known to present the Friday edition of the ITV show, were replaced by co-stars Holly Willougby and Phillip Schofield.

But it’s all for the fun of Christmas, as Holly and Phil took part in the festive pantomime.

This Morning panto: Where are Eamonn Holmes and Ruth Langsford?

This Morning viewers were hoping to see Eamonn and Ruth back on screens earlier today.

Instead, Holly and Phillip put on their very own panto to help cheer up the nation.

The production is a mix of classic fairytales, with Holly taking on the role of Cinderella and Phil as side-kick Buttons.

The hosts were also joined by Sheridan Smith, Joanna Lumley and Christopher Biggins.

However, fans weren’t too pleased as Eamonn and Ruth were missing from their usual spot.

One tweeted: “What a load of rubbish – where are Ruth and Eamonn – fancy having to put up with this every Friday!!”

A second said: “Bring back Ruth and Eamonn. Fridays are not the same without them. The rabble that’s on today is unacceptable. I only watch Fridays for them. The others are too vain. Absolute rubbish.”

A third added: “I can’t believe they got rid of Eamonn and Ruth for this!!!”

A fourth shared: “It’s Friday, why aren’t Ruth and Eamonn on @thismorning for the Xmas panto?”

Another complained: “Where’s Eamonn and Ruth? Turned off couldn’t watch that unprofessional shambles!”

Meanwhile, others were thrilled by the festive pantomime.

@thismorning I can’t believe they rid of Eamonn & Ruth for this!!!

Read more: This Morning today: Viewers flabbergasted by guest who has life-sized elf dolls and cuddles them in bed

One said: “This panto has honestly made my week! Well done This Morning for bringing smiles to so many faces today!”

Another wrote: “Not gonna lie I’m absolutely loving the panto on @thismorning.”

A third stated: “This panto is making my day… good excuse to procrastinate right now.”

Eamonn and Ruth are set to be replaced by Alison Hammond and Dermot O’Leary in the New Year.