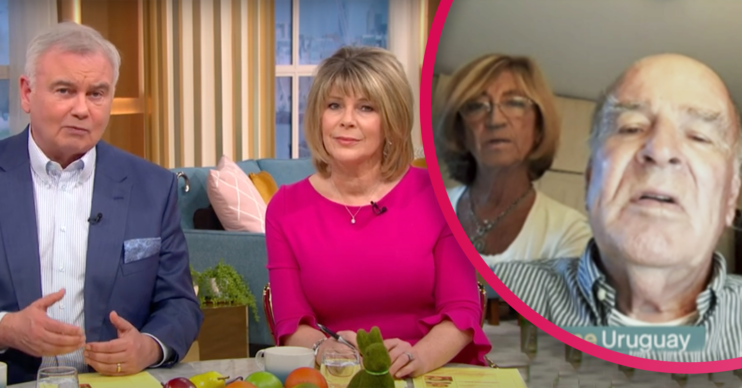 The story was shown before lunchtime and left some viewers queasy

ITV viewers have voiced their disgust at a segment on today’s This Morning (April 5).

Viewers recoiled in horror as Eamonn Holmes and Ruth Langsford spoke to a guest who had survived a plane crash by eating the flesh of his fellow passengers.

The segment was aired on This Morning before lunchtime and got a backlash from some viewers who branded it as “vile”.

The story of survivors from a plane crash in the Andes was aired and one of the survivors – Jose Luis “Coche” Inciarte – revealed how he had survived by eating the flesh of fellow passengers.

The crash in the Andes happened in 1972, and Coche was one of only 16 survivors after being in lost for 72 days before being rescued.

However, some viewers couldn’t get past his story of survival and were horrified to hear he had eaten flesh in order to survive.

One viewer raged: “@thismorning it’s Easter Monday, kids are at home and you’re talking about someone eating human flesh on daytime television.

“I like you two but this this is vile! Shame on This Morning!”

They weren’t the only one either as another viewer replied: “Exactly my thoughts.

“I am horrified and filed a complaint. What kind of sick stuff are they showing us on Easter Monday for crying out loud!!!!! Not acceptable.”

Other viewers implied they had just switched off:

However, some did see the funny side:

Its nearly lunchtime so we’ll be talking to someone who ate human flesh. OK Hannibal, lovely to meet you. #ThisMorning

Coche didn’t think he would survive

Calling in from Uruguay, Coche revealed to Ruth and Eamonn that he didn’t have much hope after the crash.

He said: “Most days I thought that I was going to go out from there. But other days, those terrible days, I realised that they [other survivors] were not going to reach any place.”

Eamonn asked if the experience was something that Coche had moved past over the years: “You documented everything in your book…an amazing read. Is it something you have come to terms with?”

However, Coche heartbreakingly revealed that he still sometimes feels like he’s back in the mountains, and on other days finds it easier.

However, the segment was short-lived, with Ruth Langsford having to step in to head to an advert break and interview pop group Steps straight after.

The quick segway from Coche’s story did not go unnoticed by some viewers.

One tweeted: “This Morning is on and they just interviewed one of the Andes plane crash survivors who ate some of their dead friends. Neither of them had read his book.

“It lasted about 3 minutes. They then cut it short to go to adverts so they could speak to….STEPS. Wow.”

What did you think of this story? Let us know by leaving a comment on our Facebook page @EntertainmentDailyFix.