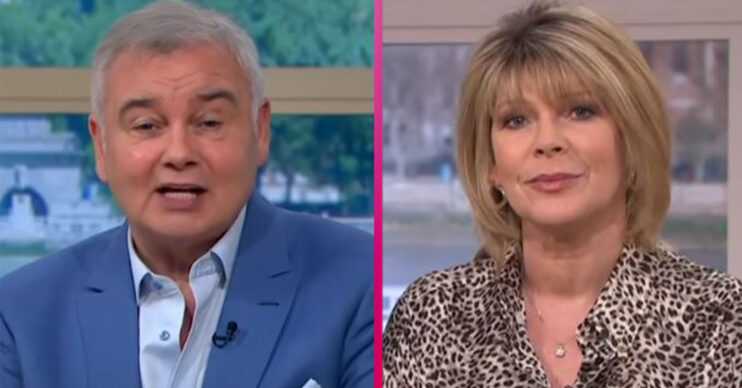 This Morning: Eamonn Holmes and Ruth Langsford to return for summer

The husband and wife duo are back for seven weeks!

This Morning stars Eamonn Holmes and Ruth Langsford will return to the ITV show over the summer.

The pair were previously replaced by Dermot O’Leary and Alison Hammond as Friday hosts and now present half-terms.

However, during the May half-term, viewers were upset when Ruth and Eamonn didn’t present the programme as Dermot and Alison took over.

When are Ruth and Eamonn returning to ITV This Morning?

Eamonn and Ruth were replaced as Friday hosts at the start of the year.

Last year, the couple hosted their final Friday show and sent a touching message to viewers on air.

Eamonn said: “You won’t be watching us any more on a Friday.

In addition, Ruth said: “You haven’t got rid of us! We’re back for half-term. It’s been a tricky year for everybody, we hope we have helped you through it a little bit.

“Thank you for all your support.”

Meanwhile, viewers have been divided over the change.

While many welcomed Dermot and Alison and their ‘refreshing’ dynamic, others were missing Ruth and Eamonn.

We’ll be doing seven weeks from July. I’m looking forward to it.

During the May half-term last month, one viewer wrote on Twitter: “Alison and Dermot on ALL week.

“We don’t want them on our TVs. We want Eamonn and Ruth, for the sole reason, they know how to present a TV show.”

Another added: “Everyone will miss Eamonn and Ruth this week!”

But others have enjoyed having Alison and Dermot take over.

Read more: Why aren’t Eamonn and Ruth on This Morning? Viewers gutted they aren’t hosting during the holidays

One said: “There’s something quite refreshing about Alison and Dermot presenting This Morning!”

Do you miss Ruth and Eamonn on Fridays? Let us know on our Facebook page @EntertainmentDailyFix.