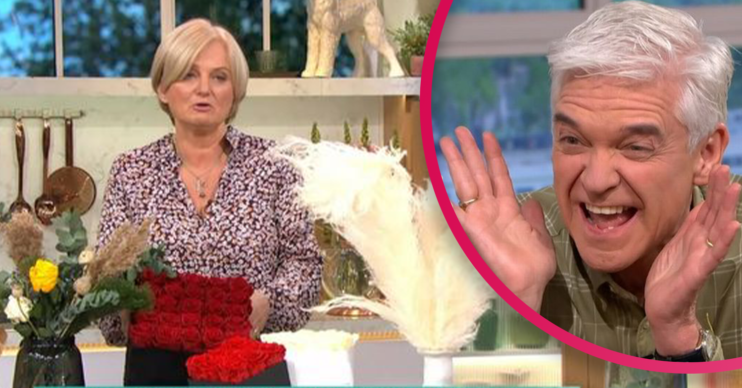 This Morning on ITV: Alice Beer accused of ‘ripping off’ viewers with dried flower segment

This Morning star Alice Beer hosted a segment on dried flowers on the ITV show today (May 25) – and it’s safe to say it didn’t go down too well at home.

However, neither the viewers at home or Phil were impressed with the flowers Alice brought to her show and tell.

This Morning on ITV: What did viewers say about Alice Beer?

Many found themselves agreeing with This Morning host Phil, commenting that the dried flowers weren’t anywhere near as nice as alive flowers.

Viewers also commented on the price – with small bunches starting at around £40.

However, Alice did try and sell them as an investment piece, saying that they’d last “years”.

‘I think these are really pretty.’ You would say that Alice, you’re trying to rip us off at those prices!

“I was around when dry flowers where a ‘thing’ before!” said one viewer.

“I can make some dead flowers myself as I usually kill them off by accident,” quipped another.

However, others took aim at Alice herself, asking her if she lived in the “real world”.

“I think Alice is on a different planet to the rest of us!! These flowers look awful,” they said.

“What’s the point of this segment of the show?? £40 for those!! These presenters don’t live in the real world,” said a third.

“”I think these are really pretty.’ You would say that Alice, you’re trying to rip us off at those prices!!!” declared another.

Dried flowers on a budget

However, one This Morning viewer did have an idea about how the segment could’ve been improved.

They said: “Would be great if Alice showed how to make your own dried flowers on a budget.”

Head to our Facebook page @EntertainmentDailyFix and tell us if you’re a dried flower fan.